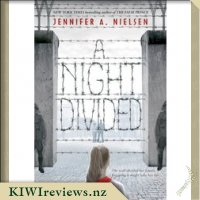 From New York Times bestselling author Jennifer A. Nielsen comes a stunning thriller about a girl who must escape to freedom after the Berlin Wall divides her family between east and west.

With the rise of the Berlin Wall, twelve-year-old Gerta finds her family suddenly divided. She, her mother, and her brother Fritz live on the eastern side, controlled by the Soviets. Her father and middle brother, who had gone west in search of work, cannot return home. Gerta knows it is dangerous to watch the wall, to think forbidden thoughts of freedom, yet she can't help herself. She sees the East German soldiers with their guns trained on their own citizens; she, her family, her neighbors and friends are prisoners in their own city.

But one day, while on her way to school, Gerta spots her father on a viewing platform on the western side, pantomiming a peculiar dance. Then, when she receives a mysterious drawing, Gerta puts two and two together and concludes that her father wants Gerta and Fritz to tunnel beneath the wall, out of East Berlin. However, if they are caught, the consequences will be deadly. No one can be trusted. Will Gerta and her family find their way to freedom?

Jennifer A. Nielsen, New York Times bestselling author of The False Prince, delves into the harrowing history of the postwar years in East Germany with poignancy and wit, bringing to brilliant life the story of one girl's remarkable courage and will to survive.

What attracted me first in choosing this book to read was the front cover; it is very striking and graphically spells out the story of family heartache and separation during the division of Germany in the 1960s.

12 year old Gerta tells her story of Soviet occupied East Berlin and how her family were force to cope when Berlin wall was erected overnight in 1961. Her father and elder brother had travelled to West Berlin a few days earlier so once the wall was erected, it automatically separated her, her mother and eldest brother from them.

Gerta longs for her family to be complete and after spotting her father acting out a childhood dance on the other side of the wall, she works out that he wants her to start tunnelling under the wall to West Berlin! Gerta bravely comes up with a plan to make this happen, but needs help. Her brother Fritz soon agrees to help and they work out ingenious ways and means to get it dug, some very risky but the story ultimately shows human resilience and unbreakable family bonds.
I really loved this book, it was extremely well written with a great balance of suspense and intrigue to keep the reader engrossed from start to finish.

I like books based in fact although some stories are a lot harder to read than others. I can not imagine how Greta and family would feel being divided like that, I loved the photos in the front of the book although some were a bit hard to look at, the families trying to talk through the fence. I found the story started off a bit slow but once the decision was made to escape then it got more exciting and I couldn't put the book down as I really wanted to know what would happen, would they escape, would they be betrayed and if so by who?

I have never been to Germany but my brother has and my sister in law is German and they have said in the past that there is a lot of damage done by the war and that some parts of the country are still not fully rebuilt and that things like the damage done by the wall is not discussed. Reading this book was realistic enough to make me wonder how those poor people coped. The book was really well written, the characters were strong when they needed to be and sneaky when they needed to be and yes it is easy to see why some people wouldn't think twice about betraying loved ones.

Since I borrowed this book from a friend I will be looking out for it to buy it, a really sad story told well.

I don't usually read stories based around the second world war but I rather like Jennifer A. Nielsen's writing and as I had read several of her books before I figured even if I didn't enjoy the book it would at least be well written. The story is based around when the wall went up between West and East Germany and follows Gerta who ends up stuck in East Germany with her brother and mother whilst her other brother and father are stuck in West Germany. We pretty much skip a couple of years till we get to Gerta seeing her brother across the wall and so begins the most dangerous time of her life.

I knew what the basics would involve and how Gerta would be expected to behave, as well as her family and I was worried that it might get to dramatized but Nielsen did a good job of balancing everything without you drowning in it. It did feel like there was quite a lag a little over halfway through, though it did fit in with the story as you couldn't have Gerta's story told at a fast pace, it did have me struggling a little to read it. However... When I got to their attempt to escape.... I couldn't put the book down and eagerly read on to see what would happen with this family.

This was a good book, and though it did lag in some parts I did enjoy it and would recommend it to others.

Two entwined families the aristocratic Inghams and the Swanns who seve them. One stately home, Cavendon Hall, a grand imposing house nestled in the beautiful Yorkshire Dales.

A society beauty; Lady Daphne Ingham is the most beautiful of the Earl's daughters. Being presented at court and then a glimmering marriage is her destiny BUT in the summer of 1913, a devastating event changes her future forever, and puts the House of ... more...