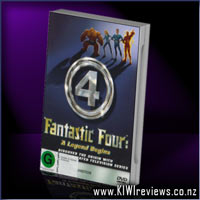 It's here - the longest running marvel series in history arrives for the first time on DVD. Learn the origin of the Fantastic Four, and be there as Mr. Fantastic, Invisible Woman, Human Torch and The Thing save the world from the dastardly Doctor Doom and his legion of villains.

Now you can relive the action and excitement with 5 dynamic episodes from the popular 1990s animated series. It's a fantastic compilation you'll want to experience over and over again.

This certainly brings back memories! Though I am sure I was younger than in my 20s when watching this first time around.

It was certainly interesting seeing Stan Lee's commentary on how he came up with the Fantastic Four, and his commentaries prior to each episode.

All episodes were well written, and superbly animated although I did find The Thing's frequent intrusions more than a trifle distracting to each story, and for a supposed scientist, he was rather thuggish. That aside, it was a good adaptation of the original comic book.

My daughter (7) was enthralled by the Fantastic Four, and has only recently put aside the David Copperfield DVD she helped me review. In her words, 'I like it, it is fun'.

With the movie out now and receiving mixed reviews, it seemed wise to track down and watch the original storyline of how the four get their powers and their relationship to Dr Doom. Just from what I have seen of the movie shorts, I feel the original cartoon version just feels more 'right'. Though 'The Thing' aka Ben Grimm is way over-the-top in the cartoon, and his constant 'more brawn than brains' antics can prove quite distractive and in places annoying, the story flows very well and just has the real character Hollywood seems to bleed out of the lo-tech stuff when they movie-fy it. This was a very good series in it's day, and it still retains all the rich goodness it did back then. Sure, todays toons have more realism, 3d rendering and all sorts of nifty special effects, but that would be comparing apples and feijoas, not even in the same scale.