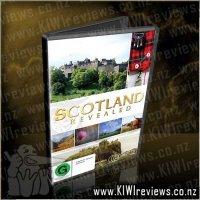 This high definition series is a celebration of the landscape of Scotland. Taking to the skies, the series travels by helicopter across Scotland capturing its beauty, its past and the wildlife that flourishes there. With this programme covering the Highlands, the Western Isles, the Towns and Cities, the Lowlands and Uplands, East Highlands and Grampian and the Far North, the series is a fascinating insight into the country and its natural beauty.

The Scottish Clans - Scottish clans (from Gaelic clan, "family"), give a sense of identity and shared descent to people in Scotland and to their relations throughout the world, with a formal structure of Clan Chiefs recognized by the court of the Lord Lyon, which acts as an authority concerning matters of heraldry and Coat of Arms. Each clan has its own tartan patterns, usually dating to the 19th century, and members of the clan may wear kilts, plaids, sashes, ties, scarves, or other items of clothing made of the appropriate tartan as a badge of membership and as a uniform where appropriate.

Scottish Verse to Landscape - The history of Scottish poetry includes the poetries of two languages, one in Gaelic and the other in English. The complex interplay between these two traditions, and between both of them and other poetries in English, has produced a body of work that is both rich in variety and beautiful to immerse in. Set to visually stunning landscape footage.

I've always been rather fascinated with Scotland and its stunning scenery, so I was looking forward to checking out this set of 3 DVDs. Unfortunately, the first DVD is a rather dry, drab ramble through a breakdown of Scotland, looking at its major cities and how they've changed, the waterways, the abbeys and castles, etc, and I found it too dry and heavy to watch more than one episode at a time without being at risk of falling asleep. The enthusiasm of the host, geographer Vanessa Collingwood, was quite often over the top and somewhat sickening; the music was grating and downright cheesy in places; and although the scenery was indeed absolutely beautiful, there was barely anything that would be classed as "typically Scottish" in sight... tartans, bagpipes (bagpipe music would've been far more suitable for this dvd!), haggis etc. There was quite a bit of history in this DVD, but it definitely could've been put across in a far more interesting way.

The one disc I did actually enjoy would definitely have been the 2nd disc, which tells of the different Scottish Clans. It gives a bit of the history of each major clan, plus shows the meaning for each Clan name, and the plaid. The lilting scottish accent of the narrator was rather pleasant to listen to, and it was definitely the narration that was the more interesting part of this DVD. It makes for a good DVD to listen to while working, not one of those you need to sit and watch as well.

Not being one for poetry, I found the 3rd disc, filled with Scottish poetry, to also be rather dry, bland, and boring. If poetry is your thing, then you might enjoy this, with the gentle rolling rhyming lilt of the narrator, but if you're not, then don't bother with this disc, as it may just send you to sleep... possibly useful for those who have trouble getting to sleep at night though.

The LazyTown friends are back, in all new adventures featuring Stephanie, Sportacus, and the rest of the LazyTown gang. SuperHeroes Sportacus and Stephanie join forces to help the LazyTowners foil Robbie Rottens latest lazy schemes, in more high-tech and SportsCandy-fueled fashion than ever before. Young SuperHeroes around the world are already lining up in front of their televisions to be amazed and inspired by the most fun and energy-filled ... more...