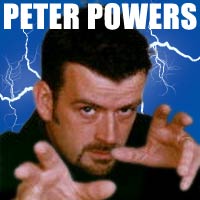 Disclosure StatementFULL DISCLOSURE: A number of units of this product have, at some time, been supplied to KIWIreviews by CapitalC or their agents for the purposes of unbiased, independent reviews. No fee was accepted by KIWIreviews or the reviewers themselves - these are genuine, unpaid consumer reviews.
Available:
See local papers, or website

Peter Powers has enjoyed huge success with his comedy stage show. Last year he had his very own tv series on channel 5 (uk), which has subsequently topped the ratings in Australia, on channel 9. (In NZ, Channel Nine is known as PRIME TV.)

A unique blend of outrageous humour and his witty, mischievous style of delivery, make him one of the best in the business.

From 40 minutes to 2 hours of fun-packed comedy suitable for family or adults.

His current NZ tour is rated R-18 due to explicit sexual content.

It was with great anticipation that I walked into the wonderfully refurbished Regent Theatre on Broadway, Palmerston North, to see Peter Powers, the X-rated Rowan Atkinson of hypnotic comedy. This man's reputation for evil humour and showmanship is well documented, and proudly displayed on his website, www.peterpowers.com.

I was running a little late, so thankfully missed the first 20 minutes, which was basically sorting out the volunteers (aka those most willing to follow hypnotic suggestions), so no great loss. As I sat down, the real show was just beginning, with Peter conditioning the volunteers to sleep at a snap of his fingers or a whack on the forehead with the microphone, a trick used with much humour throughout the show.

His irreverent style, laced with strategically placed lewd suggestions and antics, clearly explain why this show carries an R-18 rating. This is added to by a score of pelvic thrusts, suggestions of intimacy, the famous Orgasmic Handshake (performed on the female volunteers only thankfully), and large amounts of swearing and abuse from the volunteers under hypnotic suggestion.

If you have an evil sense of humour, like me, you'll find the majority of this show to be entertainment plus! However there were a few bits that cooled the audience's humour, such as the poor bloke under suggestion that he was alone, lost at sea in a little rubber raft for about 10 days. He was firmly under the belief that he was mere hours from death... then the show broke for intermission. The whole time the audience were out in the foyer having drinks, he was left on stage in the boat depressed all to hell. Peter induced greater and greater depression in the poor lad after intermission was over. Not many were amused by this bit.

Another 'act' that soured the humour of more than a few members of the audience was the girl under suggestion that every time she sat down she would feel an intense hunger, and was instructed to return to the stage (much to the annoyance of the volunteer told to plant daffodils on the stairs) and demand a pie. At which point she was handed a cream pie and was conditioned to splat it gently on her own face then return to sit in the audience... as soon as bum hit seat the loop started again. That was kind of OK, but by the time the girl was ready for her fourth pie, she was almost in tears with the hypnotically induced hunger pains. She was clearly upset and in no small amount of discomfort. There was a noticable LACK of laughter at her antics.

However, despite those two small hiccups, I would have to admit that I laughed so hard my face ached. I was grateful for the intermission, because my cheeks hurt so much I was in pain just talking! It also gave my poor overworked lungs a chance to relax and breathe normally again.

Overall I am happy to agree that this show is a winner, well worth the ticket price. If you have some spare cash and want a good laugh, this is certainly a great way to spend an evening. By the end of it, you will either be wondering why everyone grins as you walk past, or you'll be thanking your lucky stars it wasn't you on stage.

The traintastic crew are back on the rails.

Trainee engines Koko, Wilson and Brewster with their young friend, Zephie and new trainees Hoot and Toot, try to keep everything rolling smoothly, but their curiosity and good intentions often signals trouble on the tracks.