Child of the Prophecy review 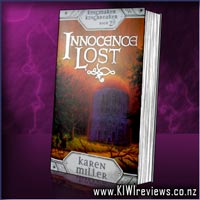 Disclosure StatementFULL DISCLOSURE: A number of units of this product have, at some time, been supplied to KIWIreviews by the company for the purposes of unbiased, independent reviews. No fee was accepted by KIWIreviews or the reviewers themselves - these are genuine, unpaid consumer reviews.
Available:
24 Feb 2006

The stunning conclusion to the KINGMAKER, KINGBREAKER series.

Prince Gar now has the magic for WeatherWorking and is able to keep his enemies at bay, while Asher has become the most powerful Olken in the history of Lur. For them, peace and prosperity seems assured. But Morg, the evil sorcerer mage, remains trapped inside a shattered body. He knows his time is running out and that desperate measures are called for.

Unwittingly, Gar and Asher become caught up in a dangerous deception which threateds to tear apart the kingdom and destroy the fragile balance between Olken and Doranen.

And no-one, not even Dathne and her secret Circle, is prepared for the consequences when the Innocent Mage is revealed at last...

I'd loved the first of Karen Miller's books - The Innocent Mage - and awaited this book with baited breath...
I wasn't disappointed!

The author was able to carry all the things I loved from the first book through to this one... the complexity of friendships - not just Asher and Gar, but Danthe and others as well, the wonder of a new world to explore (I sincerely hope this isn't the end of our travels in Lur with Ms Miller!), the evilness that pervades...

Morg is released into the seemingly settled world of Lur and creates HAVOC!

Not only is almost the entire royal family dead in a freak 'accident', but now the magicless Prince Gar has suddenly 'found' his magic!
The nation rejoices with Gar as he is crowned King - and Morg lies in wait for the moment that his trickery fails and Gar tumbles from his newfound perch on the throne...

When the magic does begin to fail, Gar turns to Asher for his support and aid.... and this comes in ways that neither of them would have EVER expected!

The Cirle is still there, and Danthe's premonitions of evilness rolling across the land comes true as Morg finally escapes his 'prison' and starts to take down the wall that has protected Lur for so long - for he has created all sorts of monsters, demons and otherwise on the other side of the wall...
And the Circle is forced into action, some of it in the deadliest possible way, to protect their Innocent Mage....

As I said earlier... I sincerely hope this is not the last we have heard of Asher and the world of Lur - as I could get to like the place...
In fact, I do already!!