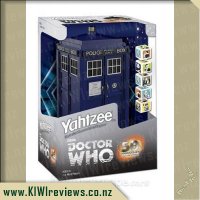 Roll three Daleks and two Cybermen for the classic combination Full House and the ultimate Doctor Who villain rivalry. If you roll five Weeping Angels, you've got the quantum locked high-scoring Yahtzee with a Doctor Who twist!

I've played Yahtzee for years, it is a great, fun, family game and was good for learning to make sets and doing some maths. It has been a few years since I've played a game of Yahtzee but during that time I have become a much bigger fan of Doctor Who (I was already one, but when they started airing the new series I became even more of one) and when the 50th anniversary episode was due to air there were a lot of Doctor Who merchandise hitting the stores and when I saw this version of a game I loved I knew that I had to have this.

I now get to say that I have a TARDIS on my computer desk, as the dice, pencil and scorecards all fit inside this TARDIS, so it is doubly fun in that it can help decorate the room and the kids have had fun playing with this sturdy TARDIS. There are five dice and each has an image of a well know character on it, it is fun to note that the Cyberman on the dice look like those in the original series, so this also makes it a good tie in to the first Doctor's. The scorecards can easily be replaced in the future by any Yahtzee scorecard, though these ones have a TARDIS watermark on them and name the characters on the dice at the top.

A great game that serves as both fun, practical and decorative.

Score: 7.5
Product reviews for listing 73: Grabbed by the Ghoulies -  Developed by Rush and Microsoft Game Studios

LAUGH IN THE FACE OF DANGER
Straying too far from your homelands, you stumble across Ghoul Haven Hall, a huge mansion chock full of freaky, funny ghoulies. You'll have to beat tons of ghoulies to make your escape, so use whatever you can find to bash, smash, crash and give the dirty-fightin' ghoulies what they deserve. Douse ... more...