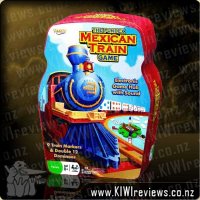 Disclosure StatementFULL DISCLOSURE: A number of units of this product have, at some time, been supplied to KIWIreviews by Holdson (NZ) for the purposes of unbiased, independent reviews. No fee was accepted by KIWIreviews or the reviewers themselves - these are genuine, unpaid consumer reviews.
Available:
November 2011

The number one Domino Game! Players build their domino tracks out from the train station hub. The electronic Train Hub toots and chugs when pressed and cleverly holds dominoes in place during game play.

This was a strange new version of Dominoes for me, and a whole new concept for the younger members of the whanau, who have never come across dominoes except as the brand of that pizza we stopped buying when they took over the "cheap and nasty" niche in the pizza market. I have to say, the concept of the game is pretty clever, but I still had some doubts.

The game turned out to be a little harder to explain to a couple of kids (9yrs & 10yrs) than I would have hoped, but after a bit of "learn by example" they said they thought they had a good idea and could we please play it anyway. So began an 30 minute dominoes session that ended with everyone laughing hard at the bad jokes, but utterly sick of the electronic train whistle. Although the kids found it fun at the start, after half an hour we were all getting a bit tired of it so skipped the "reward" of pressing the centre domino.

This game is great because you can play it flat surface but you might want to keep in mind how quick it can grow to fill up space. By the end of the game we had modified the rules a bit to allow for the "tracks" to change direction and turn back on themselves. This won't affect the play at all, but can save the game from a sudden end before it's time because you can't get the dominoes to hover in mid air because you have run out of table.

Summary: a great new twist on a classic game. If you want the game to continue, or you get more players, you can add in extra domino sets of any type because as long as they are face-down and well mixed, it doesn't matter if the domino sets look different. Just make sure they are all double-12 sets, or you will soon find yourself unable to play. My only two small issues were the train whistle, and the price. It's a little expensive, but the steel case makes it a wonderful collectable for train-loving mokopuna.

Amidst the chaos of the late Roman Empire, become soldier Marius Titus and embark on a perilous campaign to avenge the death of your family. Through the immersive realism made possible by Xbox One, you'll experience brutal skirmishes and massive battles as you fight to restore honor to Rome at any cost.