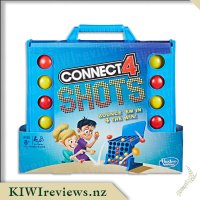 Bounce 'em in for the win!

Two players bounce the lightweight, colourful balls into the grid at the same time. Remember, the balls must hit the table before going in. Keep bouncing balls until a player gets 4 in a row of their colour for the win.

Then when the game is over, fold the grid into a handy storage case.

Connect Four is one of those games that has maintained its popularity over the years, one would say because it is such an easy game to pick up and play and takes almost no time at all to learn. Having an easy game on hand is always a good thing to have and whilst I wasn't too bothered about having a copy of the original game, my kids and I saw this and thought that it could, indeed, be a fun version of the game to own. The game follows the same exact am of the original, you want to make a row, column or diagonal of four of your colour, in a row, except this time you're bouncing balls off the table and attempting to get them into a slot.

The kids were right into this when we first got it, figuring out a plan for how we could all get a turn as they all wanted to play against me at least once. It does come with a small cardboard backing but that doesn't do anything to stop the balls from going everywhere! When our table is against the wall we don't loose the balls quite as often, so against a wall controls them a little bit more, but do be ready to go for hunts to find the balls when they go flying everywhere. Both players are meant to throw at the same time but we found it easier to take turns, less chaos and less missing balls that way. This isn't a game that comes out often but it is a fun take on a classic and we'll hang onto it a bit longer.

Quiddler challenges players to create words from an ever-increasing number of letter cards in their hand. The game lasts eight rounds, with three cards being dealt to each player in the first round, four cards in the second, five in the third, and so on. Each card has one or two letters on it as well as a point value.

On a turn, a player draws the top card from the deck or discard pile, then discards a card. When a player is able to ... more...