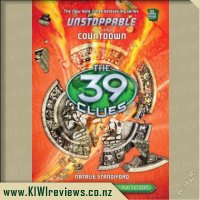 Disclosure StatementFULL DISCLOSURE: A number of units of this product have, at some time, been supplied to KIWIreviews by Scholastic (NZ) or their agents for the purposes of unbiased, independent reviews. No fee was accepted by KIWIreviews or the reviewers themselves - these are genuine, unpaid consumer reviews.
Available:
May 1 2014

The clock has run out for thirteen-year-old Dan Cahill. As head of the most powerful family the world has ever known, he and his older sister, Amy, have been in the crosshairs for too long. Dan and Amy have always managed to stay one step ahead of their enemies, but it was only a matter of time until luck failed them.

Now Dan is hopelessly trapped and nothing can save him. Nothing except unleashing an evil into the world even worse than the enemies closing in. As Dan hovers between life and death, Amy has a terrifying decision to make. Just how far is she willing to go to save her little brother?

It has been a LONG while since I read the second book in this series, so I have been kept wondering as to what events would unfold next, and I was not disappointed. Due to a bit of a error, we got book 4 first, and got book 3 more recently, so I now know that book four is the conclusion of third series, although I have some high suspicion and a bit of evidence that there will be a FOURTH series of books! I have done quite a bit of research on the Mayan civilization in the past, so I was very excited by the fact that this was where this story is based, it was that background knowledge that gave the larger part of my appeal.

I think that this book is the best out of the 3 books I've read so far, due to the fact that out of every book, of every series, this book so far has given a better idea about how the legendary Cahill Serum works, and what it's effects are on a living human. The storyline was going along as it usually does for quite a while, and the mood remained the same, intense, exciting, and mysterious. However, at a certain point in this book, things started to become morbid and stressed, as well as setting the final countdown, giving us a foresight as to how much time is left for a certain character, namely, Amy.

I think that the story was constructed well, it was very easy to read and comprehend, and it was also highly descriptive, enough for me to successfully reconstruct the story as a visual sequence in my head. The intensity of the overall story has now reached a critical point, and I think that the writer has written the book in such a way that it distributes the excitement throughout the book, but it is slightly inconsistent, it leaves some parts informative but not that exciting, while other parts were full of excitement, but didn't hold much more than a fight or escape sequence,so I guess that information and action don't always go well together.

The price is well-given, it reflects the value of the book well enough to be fitting, and it is a price that still makes the book available to a wide variety of people. Due to the fact that there was a large time gap between reading the second book and the third, I think it would be worthwhile to read this book again, and it is a good enough book that it would not be a bore to read, so I shall give that aspect a full score. All things considered, I found this to be a great read, and it has left me in enough suspense to make me incredibly driven to read the next book, oooooooooooooooooooooooooooooh, it's going to be exciting!!!!