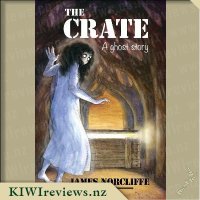 Disclosure StatementFULL DISCLOSURE: A number of units of this product have, at some time, been supplied to KIWIreviews by Quentin Wilson Publishing or their agents for the purposes of unbiased, independent reviews. No fee was accepted by KIWIreviews or the reviewers themselves - these are genuine, unpaid consumer reviews.
Available:
November 2022

A dark lake with darker secrets.
The bizarre delivery of a mysterious crate.
A fortune-teller unnerved by what she reads in a palm.
Why is the past reaching for the present with such bony fingers?

For the four teenagers staying near a West Coast lake, what begins as an intriguing puzzle ends with the most terrifying night of their lives, a night that will change them forever...

Award-winning author James Norcliffe's compelling supernatural tale will delight and thrill all young readers with a bittersweet ending that is as unexpected as it is satisfying.

Always a fan of the gothic horror and science-fiction genres, I was intrigued to find a ghost story aimed at young people and promising to offer a true supernatural experience. It was equally of interest that it had a local setting - the South Island of Aotearoa New Zealand - as it is more common to find books like this set in the old world, or at the very least in the Americas. Nevertheless, there is a strong Northern influence in the way the story unfolds and the constant references to Occam, a very British philosopher. Having lived for many years in Western Europe, I enjoyed this cultural crossover!

As a ghost yarn, The Crate works very well. There are just enough complications to make it necessary for me to reread some sections to make sure I had kept up with the plot; luckily, it was easy enough to pick up the thread and continue with the story development. Some observations come across as insignificant at the time, but later take on a new meaning and become important for understanding what is going on. I enjoy stories with twists like this; they hold my attention and make me want to read on to find out what will happen next.

The links between past and present are fascinating, presenting a wonderful "what-if" culminating in an ending which is both highly unexpected and rewarding insofar as the loose ends are finally tied. I did think the ending could have been anticipated earlier in the book; it came as rather a last-minute change of tack rather than a gradual development. I also think that the Occam's Razor solution, which presumably favours the simplest and most direct answer, did not apply here.

Having read and enjoyed the book, I passed it on to the 15-year-old daughter of a friend to get a second opinion. She is a reader of average ability, and her comment was that, although she enjoyed the book, she found parts of it hard to understand. I had to explain to her the meaning and origin of "Occam's Razor"; she also had difficulty working out where the teenager Jack had disappeared to! However, we had a moment of laughter when she read the gravestone inscription where Skip made the joke about Donald Trump - that was highly topical! She thought that the book might be a bit too challenging for the recommended age group (10+) and commented that it might be more suited to secondary school students.

It would be interesting to see more books for young people set in this part of the world (Aotearoa New Zealand's West Coast). Much of our current literature originates in countries overseas; it is great to see our landscape and some of our customs highlighted in the context of a novel. The text is fluent and very readable; I finished the book in one sitting, and even my 15-year-old friend read it within three days. Personally, I am now motivated to seek out more books from this author.