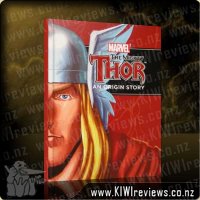 Based on the Marvel Comics by Stan Lee and Jack Kirby this book has been adapted by Rich Thomas and Jeff Clark for Marvel.

A Myth Walks Among Men.

A hardcover, colour illustrated story of The Mighty Thor. An Origin Story.

I won this book from KIWIreviews and have to admit it slipped down the side of the couch and has only just been found. My daughters were very excited at getting to hear all about the Mighty Thor. My husband is a huge comic book geek and loves all of his super heroes so while I was trying to pronounce some of the words he sat in the background correcting me.

I knew nothing about Thor besides the movie which saw ages ago so basically had forgotten most except that he has a brother Loki and his dad is Odin. I actually found the story to be fascinating and learnt so much. I had no idea what the hammer actually represented or that he had been banished to earth where he became a doctor.

The pictures were ok and explained a lot. The font throughout the book was done differently which I really enjoy. It did have more story than I was really expecting. As a whole this book is great if you want to get more of a background of Thor and find out how he became the man he is today. It is rather shocking though that the father admits that he is the favourite son, really no one should have favourites when it comes to their kids. It must of struck a cord because once I finished the book my eldest asked me who my favourite was.

I am a comics book geek and a huge Marvel fan so when we got these for the boys (aged 5yrs & 9yrs) I was naturally eager to sit by them and read it with them.

The storyline is true to the comic - and while it includes the abduction of our hero it excludes the darker details of the comic book storyline and evil villains which pleased my maternal instinct making the over protective (don't-you-scare-my baby) part of me approve for bedtime reading with my 5yr.

My only disappointment was the artwork which I thought would resemble more of the comic books than a typical child's book. But even with this forgiveable editorial artwork act - I would highly recommend and at such a reasonable price, the size of the book, the content, depth of storyline is a must have for any home bookshelf.

I read this book a few weeks ago prior to heading off to watch The Avengers and was pleased I had as I enjoyed knowing the back story behind The Mighty Thor!

This book, as with the others I have reviewed, is great. I thought the illustrations were really colourful and eye-catching. On some pages the whole page is taken up with the picture with only a few words. They are very precise, almost intricate in some of the depictions, capturing detail and depict the story so well that you actually don't need the words to tell you what is happening on the page. As with Spider-Man there is a Value thread in this book about being worthy of great power and the value of Humility.

The typeset is perfect with a mixture of bold words and italic and normal typeset which is well spaced for beginning readers. My beginning reader struggled with words like Asgardian and Heimdall but managed to read a lot of this book herself. Miss Four of course loves the pictures and she is often to be found curled up looking at this and the Spider-Man book "reading" to her cat!

Even if you aren't into the whole "Marvel Super- Heroes" franchise this is a great stand alone book at a great price.

Now, this one is better than Iron Man. if I was only allowed one of the three origin stories, this is the one I would go for. The artwork is chock-a-block full of detail, though it isn't detailed to the point of being almost realistic, but it had good shading and always seemed to narrow the focus to the important characters.

The story was well-structured, there was no annoying repetition or boring parts, it kept me well above the calm waters of boredom and therefore should be the best thing since sliced bread for young readers. The characters and storyline were similar to that of the Movie Thor, and it was a lot more like the movie than Iron man.

The price is great, not too cheap or expensive, which means that people will be able to buy the books without emptying more of their wallets! I think that this book is okay for kids 6+, so I hope that they enjoy it!

Technology may be different in 2060 New York, yet the city is still a place of many cultures and great divides. But as ever, some murders receive more attention than others-especially those in which the victim is a prominent businessman, found in his Park Avenue apartment, tied to the bed-and strangled- with cords of black velvet.

It doesn't surprise Lieutenant Eve Dallas that Thomas Anders's scandalous death is a source of ... more...