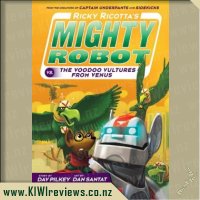 Ever wish you had a big and powerful flying robot for a best friend? Friendly robots can be fun! But with giant friends come giant responsibilities. In this book, the evil Victor Von Vulture and his army of Voodoo Vultures from Venus are about to take over planet Earth. Only the super-smart tricks of Ricky and his Mighty Robot can send the bad guys packing!

My son (age 7) loves Ricky Ricotta and his Mighty Robot. The format of the books are usually very similar: a bad guy wanting to take over the Earth. In this case it's Victor Von Vulture and his army of Voodoo Vultures from the planet Venus. The story introduces a few topics for discussion: the planet Venus, hypnotism (a topic that my son finds very interesting) and what it means to be responsible, there's also an element of problem solving.

This book is great for young readers and encouraging independent reading. The chapters are short with just a few paragraphs on each page and the story is fast paced and action packed. We read it all in one sitting but I imagine it would take my son a few nights if he was reading it himself.

I love the colour illustrations (the original was all in black and white) - they really bring the story to life. There are a few comic strip pages which are fun as well as the flip-o-rama depicting the final battle between Ricky's Mighty Robot and the Voodoo Vultures.

I'll be adding this book to my son's summer reading list to keep him in practise and ready for school next year.

My daughter took a small break from reading the Hobbit with her dad in the last few days. She wanted to spend some quality time with me and so I decided we would have an extra long bedtime two nights in a row and work our way through this book. Now, both evenings she has been out of sorts. She was worrying about her school work, and sibling stuff and was so teary. As soon as I started to read though, her whole posture changed.

She relaxed completely, and edged closer and closer to me. She rested her head on me, as I read. We were able to get a lot out of the book. For example, there is stuff about the planet Venus, which was interesting to think about. We talked about what it might be like there. Then there was stuff about being responsible. I was able to ask her what that might mean and then the book talked about what it meant to the characters as well.

Mostly though, this is a book about another silly super villain trying to conquer Earth. It is full of science fiction, robots, space machines, silliness and battles. The Flip-o-rama section was brilliant as always. It is so neat having those few interactive pages that give us a good giggle. I especially liked the dancing robot and the bright colourful lights. My daughter liked the ending too, though she wondered if the artist couldn't have put a few extra flip-o-rama pages in, to show what the television was playing. I thought that was a neat idea, she is always thinking outside of the box. No doubt she'll make her own at some point. She loves the flipping pages the best.

This book is a bit of a bargain at $10. It's hard to entertain a kid for that little these days, plus if you read together you get the added bonus of quality time together. The book would definitely make for a great Christmas gift for any Dav Pilkey fan and any younger readers who likes Captain Underpants or Super Diaper Baby.

Zog is the keenest dragon in school, but will he ever win a golden star?

Listen to the story, sing alond with the song - and make a 3-D Zog scene!