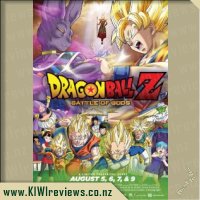 The Z-Fighters must contend with Lord Beerus, the God of Destruction. But it takes a God to fight a God, and none of them are Gods - not even the Saiyans. But now there is hope, the creation of the Super Saiyan God. Will the Z-Fighters be able to defeat Lord Beerus?

When I heard that there was a new Dragon Ball Z film in production (the first in 17 years) I was incredibly excited. Dragon Ball Z had been a staple of my television viewing as a teenager, and the end of the series had left me wanting more.

The fact that this film is canon is one of the biggest positive notes for this film, but I quickly found that it was a film that really relied on the viewer having the prior knowledge of the Dragonball and Dragonball Z Universe, referring to previous villains, and making many in-jokes that you need the prior knowledge to fully appreciate. It was great to hear the same voice actors being brought back for this feature.

I found the animation to be a bit odd; with the improvement on technology over the years, clearly they haven't quite gotten it down perfect, but the overall visual environment was far superior to the television series.

With regards to the plot, I was both pleased and disappointed. As the villains grew stronger and stronger in the DBZ universe, more and more Z-Fighters become obsolete. This trend continues, with only Vegeta and Goku, able to contribute at all. This led to a wealth of underutilised characters, which was rather unfortunate. The general storyline, however, was unique and intriguing, and the end of the film was a bit of a shock.

I really enjoyed this film, and it was full of comedy gold (for the long-term fans) that had the theatre laughing out loud. I will definitely be getting this on DVD if it comes out, and am seriously considering rewatching the DBZ series again.