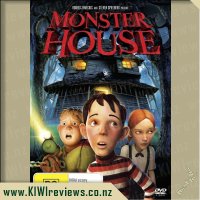 There goes the neighbourhood! Three adventurous kids do battle with a living, breathing, vengeful house in this comically-frightful CGI tale from mega-producers Steven Speilberg and Robert Zemeckis. Direct from its big screen cinema release and featuring the voice talents of Steve Buscemi, Maggie Gyllenhaal and Jason Lee, MONSTER HOUSE is funny, smart, scary and âśthe best computer-animated feature to from Hollywood in a long whileâť!

I went to see this when it came out at the movies, with my mum and I have to say that I still enjoy this movie eight years later.

DJ lives across the road from penultimate spooky house, but not only is it spooky, it has a very mean and nasty man living in it who will take anything that gets on his property. DJ monitors the house with his best friend Chowder and end up recruiting Jenny when she heads to the house and tries to sell something, showing her that the house is alive. The end up setting off together to save the neighborhood.

When I saw this at the movies, there was a part at the start which started to spook me out a bit (and I was 18 at the time

). My son has watched this a few times and was full of questions as to why everything happened and so on, so given the reason behind the house being haunted it was a good lesson to teach anyone, without giving away spoilers, it is a good moral to the story. Whilst my two younger kids aren't too fussed about "Monster House" my eldest loves it and has a lot of fun watching it.