« Indiana Jones and the Temple of Doom review 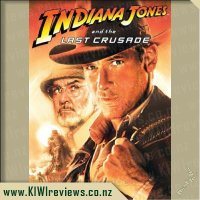 An art collector appeals to Jones to embark on a search for the Holy Grail. He learns that another archaeologist has disappeared while searching for the precious goblet, and the missing man is his own father, Dr. Henry Jones. The artifact is much harder to find than they expected, and its powers are too much for those impure in heart.

Out of all the four movies in the Indiana Jones series I would have to say that this is my favorite installment in the film series.

Indiana once again has to butt heads with the Nazi's, this time it is over the Holy Grail, but to add to everything he learns that his father was trying to locate the Holy Grail too and has now gone missing To begin with I wasn't too fussed about it as while I had loved the first film I hadn't enjoyed the second one as much so I wasn't sure what to expect bu I ended up really enjoying this movie.

I would have to say that I loved the relationship between father and son, each comment and dig that they would make at the other, then the puzzles that needed to be figured out, it was fun to try and work out what was going on along with him. I also enjoyed the glimpse into Indiana's childhood and how he ended up with the hat, bull whip and phobia of snakes. The special effects were well done and it wasn't until closer to the end that you could really pick up on things.

All in all I really enjoyed this movie. The final film in my Indiana Jones-a-thon, and this is the film that I remember the most. Interestingly I didn't remember that it involved Sean Connery, but that was a nice surprise. This film continues on with Dr Jones' battle with the Nazis to prevent powerful items from getting into the wrong hands, in this film the Holy Grail.

Similar to the first film , Raider of the Lost Ark, Indy is forced into finding the item, due to a missing person that he cares about; in this case, it was the disappearance of his father (Sean Connery). It was a fun film to watch with the return of riddles, that needed to be solved, and many action packed sequences, including chase scenes with tanks.

The CGI was generally a lot better in this film that in the previous two, as it was not really noticeable until the end. But the best parts were definitely thanks to the riddles. They gave the viewer an opportunity to try and figure it out for themselves, before the answer is given, and I love it when I get to use my brain. The supporting cast did a wonderful job, and added many comical elements, and it was great to see the return of other cast members from the first film.

The minimal use of the supernatural is what appealed to me the most, and brings this film right up to the number one position in the Indiana Jones rankings.

Kristen Wiig (Bridesmaids) stars as Imogene, once a promising young New York playwright whose promise has fizzled, thanks to a crisis of confidence. Heavily in denial about being dumped by her society boyfriend, Imogene uses her skill for drama to stage an elaborate fake suicide as an appeal for his sympathy. But her attempt backfires when she's put into the custody of Zelda, her estranged gambling addict mother (Annette Bening - The Kids ... more...