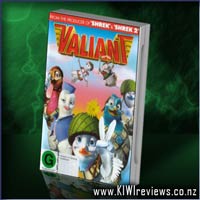 Disclosure StatementFULL DISCLOSURE: A number of units of this product have, at some time, been supplied to KIWIreviews by Roadshow (NZ) Ltd or their agents for the purposes of unbiased, independent reviews. No fee was accepted by KIWIreviews or the reviewers themselves - these are genuine, unpaid consumer reviews.
Available:
June 2006

Valiant, an eager young wood pigeon, flies to London to join the Royal Homing Pigeon Service, dreaming of becoming a hero! He is joined by a group of misfit pigeons (including Bugsy - a street pigeon from Trafalgar Square and Lofty - a posh bird from Oxford) at the training camp. When the new recruits are sent on one of the war's most important missions, they must pull together to escape the clutches of the enemy falcon Von Talon and ensure they get the vital message back to Blighty.

My 9 & 3 year old enjoyed this move as much as I did. I love the fact that the whole family can sit down, enjoy the movie together and it isn't too baby-ish for me or too adult for the girls.

It is a movie that I could never get sick of watching and enjoy the information they give on the war. The only problem for me is listening to a interested child asking "Why?" every time something happens. The graphics and cast list on this movie are great and tie things together nicely. It is also educational to a point and one that I would let the girls watch over and over.

This is a great movie for older kids and adults alike, but some of the scenes, though 'cleaned up' a lot, can be a little scary for the younger rugrats. My 6yr old son loved the movie overall, which was a great relief for me, but he had to look away a couple of times because he found some bits a little disturbing, such as the scene that has a downed bomber exploding.

However, this did not reduce the appeal of the movie for him. He was entranced by the story, asking lots of questions about why did they speak funny, why did the falcons want to catch the pigeons, etc. This was a wonderful thing to see, a child actively seeking information and education. If someone had told me watching a cartoon movie about bird dramas and World War 2 would be a bonding event between my son and I, I would have laughed. There are times it is great to be wrong.

Overall, with some amazing voice talents, a great plot with plenty of action, drama and humour, and even the avian equivalent of the movie-staple car chase, this really has something to appeal to anyone. Personally, I think it should get a PG rating... but we can only hope that the trust we have placed in the hands of our Chief Censor is justified.

Score: 7.3
Product reviews for listing 2384: Night at the Museum : 2 : Battle of the Smithsonian -  Director: Shawn Levy

History is larger than life - and twice as funny - in this minumental comedy sequel that's even more fun thah the original.

Ben Stiller returns as Larry Daley, a former night security watchman at the Museum of Natural History, where the exhibits come alive after dark. But now Larry's nocturnal friends are being retired to the archives of the Smithsonian Institution, luring him back for a hilarious, all-out battle against a cranky Egyptian Pharaoh who plans to take over the museum... and the world!