« A Million Ways to Die in the West review 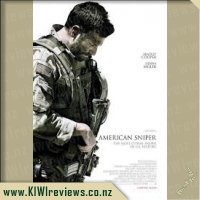 Disclosure StatementFULL DISCLOSURE: A number of units of this product have, at some time, been supplied to KIWIreviews by Roadshow (NZ) Ltd or their agents for the purposes of unbiased, independent reviews. No fee was accepted by KIWIreviews or the reviewers themselves - these are genuine, unpaid consumer reviews.
Available:
on DVD from May 2015

I found this movie to be a glorified portrayal of an american seal/sniper. It makes you feel like chanting 'America is great' and down with every other country who is against them. It tries to justify the killing of other races/religions because the law is 'an eye for an eye' but at the same time isn't the other side using that same justification and in the end doesn't that leave both sides blind? I just found Chris Kyle to be extremely one dimensional

I did not know anything about this movie before I watched it with my husband. He knew all about it and was excited to see it but he also felt that a lot was left out. There was no mention of Jesse Ventura and the last scene left me so confused. It could of explained his death a lot more than stating he was just killed. I liked the small tribute at the end. But as a whole this movie glorified war and death.

I found the movie jumped around a bit. It tried to explain to much too fast and jumped from scene to scene. It showed you things, in my opinion, that did not add to the story and left you confused in other areas. I found it slow and drawn out and focused a lot on being a sniper. He had such a close relationship with his brother and then during the war they went there seperate ways. There was a scene where they briefly saw each other as Kyle was starting another tour but never mentioned what actually happened, why his brother was such a mess and never touched on the subject again.

I found Bradley Cooper acting was awesome. His raw emotion is visible as he is torn between two worlds. You can see the hurt and confusion etched on his face whenever he was home. Feeling guilt for not being back with the marines. I also found his upbringing had a lot to do with the way he turned out. The opening scenes where he shoots a deer and then his father says there are three kinds of people in the world, sheep, wolf or sheep-dog - that helped explain a lot into his thinking and mindset.

Its not a bad movie. But not knowing anything about the guy I can not realistically decide what is true and what is 'hollywood truth'. I guess like most 'true movies' you take it at a grain of salt and choose to believe what you like. This movie has been heavily criticised as propaganda against muslims and the Islamic religion. While I have seen the negative comments that have poured over social media networks following the release of this film, after finally watching the film myself, I confused by the comments. While patriotism, the pride and connection with your community and nation is a heavily communicated theme in this film, it is no different to other such films. The only difference is who the "enemy" is; in 'Fury', the enemy were the Nazi's, In 'We Were Soldiers' and 'Full Metal Jacket', the enemy were the North Vietnamese, and in this film the enemy are al-Qaeda troops in Afghanistan.

I found this film reasonably thrilling from the start. While it did take a while for me to get used to the "Texan" accents, the quick visual timeline of Chris Kyle's SEAL training, love life and first tour, moved at a fast enough rate to ensure that it remained exciting. I found it to be a rather believable representation of the state of the war in the Middle East.

While many may think that the fact that there are few "good" Afghani people in this film, and try to translate this to real life now, they need to be reminded that the "good" people would try to leave the evacuated areas, thus you would only come across people that support the al-Qaeda, or are too scared to oppose them. Simple as that. It is too easy to focus on race when movies like this are shown, but it is important to make people aware of the context. The "why", instead of "who".

While I enjoyed the first half of the film, it quickly became a bit tiresome. The speed of the storyline sped up, but also slowed down, with more time passing by, but emphasis placed on the impact of the war on his personal life, rather than on the battle field. It was rather a fitting ending though. It served as the perfect example of the effects that a war will have on the soldiers. Effects that they can't just walk away from.

As you can tell, this film creates many talking points. It helps people to remember the sacrifices that others make in their name, for their nation. I enjoyed it, but rather like 'Full Metal Jacket', the part that we love was the first half. When confronted with the reality of war battles, the enjoyment is reduced. People love the heroic victory, but we know how this story ends.