ProdID: 3355 - The Curse of the Bogle's Beard
Author: Siobhan Rowden 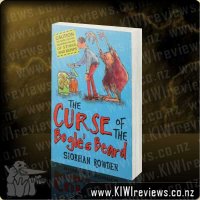 The Curse of the Bogle's Beard product reviews

When Barnaby's dad mysteriously dissapears, Barnaby is forced to move in with his gruesome Granny Hogsfleash. And there are sinister things happening in Granny's house: Menacing noises in the night, a mysterious locked cellar, an old diary containing long-lost family secrets, and granny herself, who is acting very suspiciously. Barnaby must unravel the truth if he wants to save his dad from a very sticky ending...

This book will have you in a pickle.

The Curse of the Bogle's Beard is a great little book. The first thing you notice is that the illustrator, Mark Beech's work, looks an awful lot like Quentin Blake's work. That's the guy who worked with Roald Dahl a lot. The front cover is a striking blue colour, with a boy, some strange pickles and a creepy monstrous character behind him. A bright yellow warning cautions the reader that there will be lots of stinks and burps inside. It is NOT wrong.

Rowden's writing is quite similar to Dahl, so in a lot of ways the illustrations following suit is great. Throughout the book, the pictures are black and white and grey. They show you glimpses of the characters and whatever weird and wonderul thing is occuring at the time. Some of the fonts used are fun, but the book doesn't over-do the use of different fonts like some kids books do. I also liked the snippets of diary entries as well. They were fun to read.

The characters in the book are what I would call typical Dahl style. A dysfunctional family, with at least one adult who is just putrid. Its an adventure with magic, mayhem, and at the centre a boy hero. It would definitely suit a boy reader, though a girl would enjoy it just as much. I did find myself dry retching a couple of times, but I worked through that and it didn't make me put the book down. An overall enjoyable read.

To maintain a standard of living for both, David relies on his intelligence and ingenuity to create an environment which keeps Trisha safe, educated and ... more...