Disclosure StatementFULL DISCLOSURE: A number of units of this product have, at some time, been supplied to KIWIreviews by Scholastic (NZ) or their agents for the purposes of unbiased, independent reviews. No fee was accepted by KIWIreviews or the reviewers themselves - these are genuine, unpaid consumer reviews.
Available:
June 2021

In October 2019, a wayward takahe couple was recaptured ten days after escaping from their predator-free sanctuary at Tawharanui Regional Park. Their adventure provided the inspiration for Sally Sutton's humorous story.

Children will delight in the cheeky and daring spirit of Walter and Manaaki. The book is beautifully illustrated by Jenny Cooper, and includes interesting facts about the takahe at the end of the story.

Miss 3 was really, really excited to receive this book. We love sitting together to read and the bright cover of this book drew her in straight away. "Can we please read it right now mummy please?" she enquired, and how could I say no to such a polite request! She had already flicked through the pages looking at the pictures and trying to get a feel on what the book was about. I asked her what she thought was happening in the story and she quickly replied that it was about two pukeko birds going walking.

Pukeko's are a familiar birds but she hadn't heard of Takahe's before. This book actually has some information at the back of the book to tell us a bit about Takahe which was very interesting and we learned that Takahe are bigger and more brightly colored than Pukeko! In fact not only does the book give us some factual information on Takahe it is amazingly based on a true story about a pair of Takahe that escaped from their predator free sanctuary and went on an adventure of sorts before being rescued and returned home.

Knowing that it is based on a true story makes this book all the more heart warming and pretty darn special. The story is sweet and I love the way the author has given this cheeky pair of birds such clearly mischievous personalities in the way she has told the story. We hear how they want to see a cat, and the road and cars which would really be pretty terrifying for a bird but shows how adventurous and curious these birds are. The story has some repitition and some interesting words that make it fun to read and after the 87th time(maybe slight exaggeration, and not exact figure) I found miss 3 reading along especially with some of the repeated phrases. It has definitely been very popular because what 3 year old doesn't love a good adventure story.

We also loved the clever illustrations, miss 3 actually very quickly cottoned on that there were some clever clues in the pictures that someone was trying to catch Walter and Manaaki the Takahe as we see some humans with nets and cages always looking for the birds as they explore the world beyond their sanctuary. The illustrations are cleverly comical making the cheeky personalities of the birds evident both in the story and the pictures to accompany it. The author and the illustrator have really brought these characters to life in a magical way making this book such a delight to read.

The ending is so heart warming and we love how Walter and Manaaki declare there is no place like home! Such a nice message but not only that we were glad that despite their adventure these special birds were safe. I feel this would be a great book to read with children to open up discussion about native birds and the work that is done to protect them from predators but is equally as good to read purely for the enjoyment of the story as it is truly a special book. 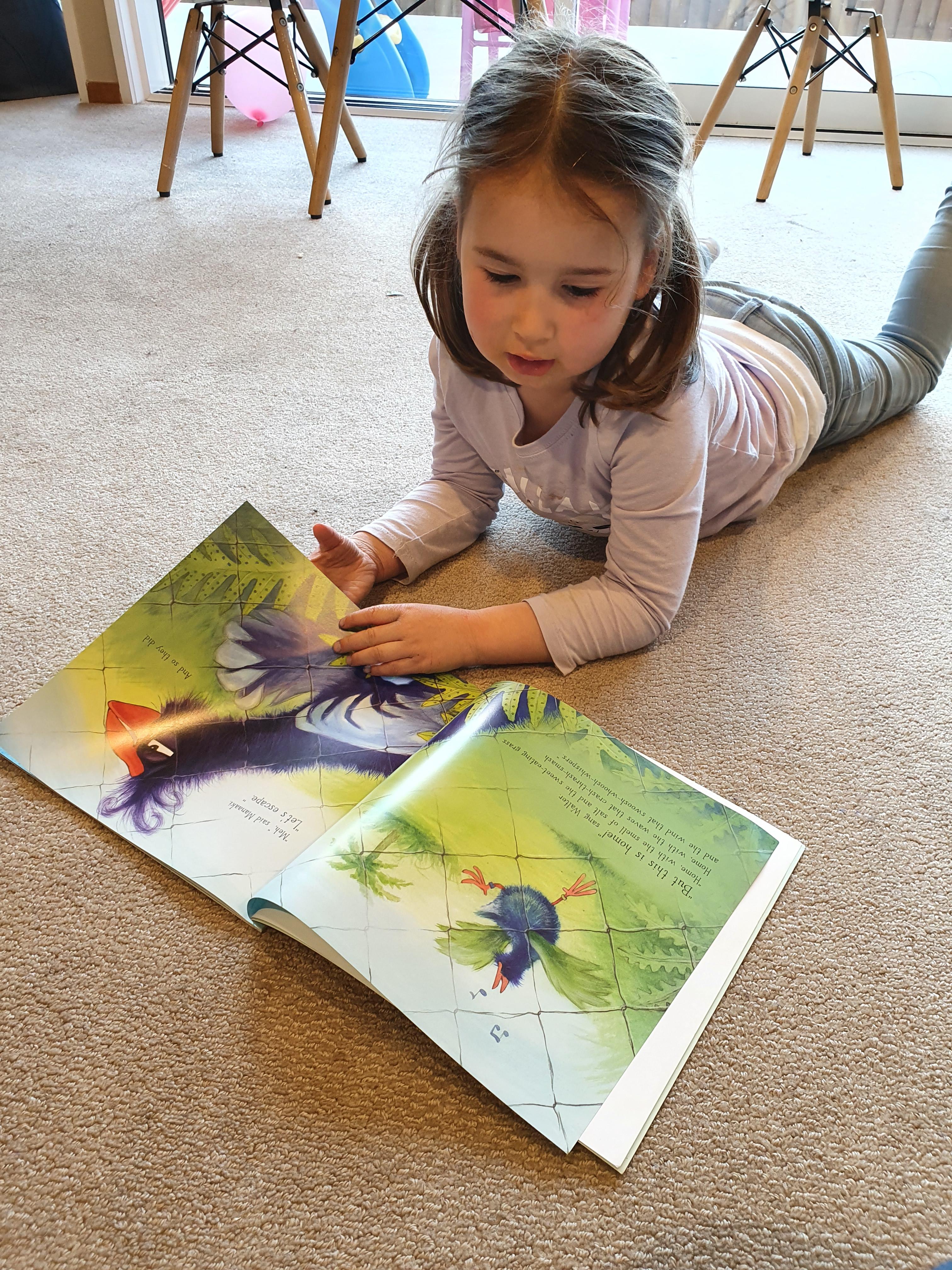 When Miss Four first saw this book, she became very excited because she thought it was going to be about pukeko, and they are birds that she is familiar with. She was intrigued when her mother explained the differences between pukeko and takahe: the latter are much heavier and their colouring is brighter. (There is a useful description at the end of the book which mother and daughter found helpful too.) However, Miss Four said she was quite happy to read about takahe as they looked just as interesting as pukeko.

I am not sure who enjoyed the story more - Miss Four and her little brother, or their mother! The children loved the repeating phrases and the cheeky looks on the takahe faces, but their mother recognised her own children in some of the naughtier behaviours. At two and four, they are still good friends and more than happy to encourage each other to test boundaries and take risks. Just like them, the takahe in the story are mischievous and curious about everything around them. Walter is a little more conservative, rather like Mr Two, but Manaaki is a bold explorer just like Miss Four!

The story is pitched at the right level for pre-schoolers. The text is not too complicated, and the graphics make it easy for a younger child to follow the story even if he does not yet have all the words to match. Both children were excited, becoming quite anxious when in turn the takahe were threatened by different animals and then a car; both were relieved when big humans arrived to take them home again. Being free is fun for a short time, but two tired little takahe needed to get back home to their own beds. Miss Four was relieved that the birds would be staying at home forever as they would be safe there.

There were questions from both children as to whether the birds would be happy living in captivity or might want to be free again. The concept of endangered species is a difficult one for children so small to understand, but they know about zoos so understand that humans sometimes look after animals in artificial enclosures rather than in an area where they are free to roam - like their own cat. Certainly, this book sows the seeds of understanding, and as the children get older, they will better understand the importance of helping at-risk species to survive.

Personally, I really enjoyed the book - and it was interesting to learn that it was based on a true story. It is easy to imagine Manaaki with his poetic turn of phrase and cautious attitude trotting along behind his friend Walter who always responds in single words before deciding they should embark on the next adventure. I just loved his "Meh!" when Manaaki described his beloved home.

Now that the ley lines around Cabeswater have been woken, nothing for Ronan, Gansey, Blue, and Adam will be the same. Ronan, for one, is falling more and more deeply into his dreams, and his dreams are intruding more and more into waking life. Meanwhile, some very sinister people are looking for some of the same pieces of the Cabeswater puzzle that Gansey is after...