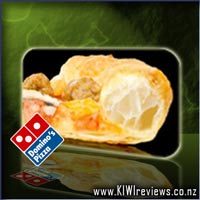 Disclosure StatementFULL DISCLOSURE: A number of units of this product have, at some time, been supplied to KIWIreviews by Domino's Pizza or their agents for the purposes of unbiased, independent reviews. No fee was accepted by KIWIreviews or the reviewers themselves - these are genuine, unpaid consumer reviews.
Available:
for a limited time

A delicious, crispy, puff pastry crust available with your favourite toppings for a melt in your mouth pizza experience.

Tried this again with the funky chicken topping... Ten thumbs up! (only having two is a real problem) The funky chicken is quite herby and I was worried a little about losing the flavour of the pastry but the two combined perfectly. Well done Dominos, this really is a winner!

Most likely my favourite pizza speciality crust I have ever had. Great price compared to the other surcharges and really tasty. No strength to it tho which means careful hands and letting the pizza get a bit cooler before tuckiong in so that the cheese has time to harden a bit. Can change the flavour a bit but worth it. Trick I found was to roll the slice up from the crust first to the point last and eat it like a taco so that you spead the topping around over the deadzone of pure crust at the outer edge. Excellent munchies Dominos so keep it around for a while please.

I'm with Neoshibby on this one... very tasty, though droopy!

I did enjoy every bite of this that I had, though I had to hold it carefully to stop the toppings tumbling to the floor!!

Don't think you would want anything too overpowering as a topping on this base, as it's nice to actually eat the base and be able to enjoy the flavour that it has itself...

In my humble opinion, this is THE best pizza crust yet. It was delicate and flavourful... for once I actually enjoyed eating the crust almost as much as what was on top! The only problem I had was that it really was a very thin base that was quite droopy and hard to hold... as a preferrer of the thin style base anyway it wasn't vastly worse, but could use a little bolstering as it were.

Fantastic! Well worth the surcharge.

This is one of the best crust ideas that Domino's has had in a while. There is plenty of flavour in the crust itself and it doesn't overpower the flavours of the toppings.

I usually have problems with overly fatty foods but this pizza didn't have me racing to grab the antacids. There was a small hiccup with picking up slices as the puff pastry doesn't have a terribly great structure to it and became a little fiddly.

The puffection crust would be, I think, better suited to a slightly flavoured pizza topping such as the Double Bacon Cheeseburger or maybe the Mr Wedge.

I look forward to more opportunities to have this crust with some of my fave toppings, and at only $2.00 for the surcharge I think it still makes a reasonable cost for a pizza meal.

Wow, this one really caught my attention. Puff pastry is not one that would leap to mind when I thought of pizza, but whoever did explore the concept deserve a pat on the back for sheer brilliance.

A light, buttery flavour, and no great wadge of crust left to try and crew through, as it cools to a near leather-like toughness... even as the pizza was cooling, the crust edge was still light and easy to eat without requiring massive jaw strain.

Overall, best suited for a milder topping, due to it's subtle flavour and texture, I found it very enjoyable with the Cheeseburger topping. I suspect it would lose something holding a heavier topping up. Being light and fluffy doesn't allow for much structural integrity or support ability.