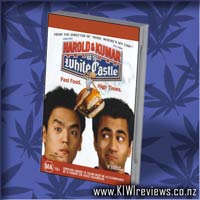 Disclosure StatementFULL DISCLOSURE: A number of units of this product have, at some time, been supplied to KIWIreviews by Roadshow (NZ) Ltd or their agents for the purposes of unbiased, independent reviews. No fee was accepted by KIWIreviews or the reviewers themselves - these are genuine, unpaid consumer reviews.
Available:
March 2005

From the director of Dude Where's My Car, comes a tale of fast food and high times.

Two pals, one a Korean American investment banker; the other an Indian American medical school candidate, are both hanging back watching television and sharing a joint when they get the munchies.

After seeing a commercial for White Castle hamburgers they go on an adventure through New Jersey looking for an outlet.

I can see what my fellow reviewer means about this movie if you have ever experienced being stoned and getting the munchies you could definitely relate to this movie. You may not go to the extremes that Harold and Kumar went to to get their burgers from White Castle but you may need to rush to the pantry to see what you can rustle up or a quick trip out to the drive thru.

While I found this movie very funny it lacked a lot of story line with it surrounding around a pair of stoners on a mission to get takeaway food. Lots of funny moments along the way as they came across hurdles and made a number of pit stops. The laughter throughout the movie was pretty much non stop but I wouldn't really pay to see it again.

I can see this appealing to younger people who are still in this faze of life and would find the movie really funny.

If, in your youth, you had a brush with The Good Green, you'll remember what it was like to have a massive session, get the Serious Munchies, and then spot an advert on TV for food... it's almost a direct input from your eyes to your stomach, and the craving simply will not be denied.

That is the premise for this whole movie. It's Cheech & Chong for the modern day, with outrageous events and an almost impossible sequence of events that lead our counter-culture heroes through a rollercoaster ride of mayhem and madness, with detours through The Twilight Zone and 'Having to Deal with Straight People'-land in a comedic nightmare landscape of stupidity, lust, hunger, and a wierd encounter with a seriously-trippin' Douggie Hauser M.D. on the side of the road.

It's almost enough to make even a hardened stoner rethink their lifestyle choices and 'go straight'! When I had a serious sesh with the boys, many years ago, if I had thought for one microsecond that I would have had to face anything like the adventures of these two, I would have dropped the joint into the beerbottle and headed home to start learning Quantum Chemistry or something reasonably easy by comparison!

Overall, this movie is a right giggle for any ex-stoner... and if you haven't gotten to the ex- bit yet, you'll find this hillarious when under the influence. It takes a really interesting look at the 'normal' world through the eyes of a couple of heavy stoners who just want the ultimate muchie experience... and find the world unwilling to be reasonable about it.

Score: 7.5
Product reviews for listing 7873: Rebel In The Rye
Directed by Danny Strong

The Academy Award winning producers of Silver Linings Playbook, Milk, American Beauty and Sicario vividly bring to life the world of legendary writer J.D. Salinger and the experiences that shaped one of the most renowned, controversial and enigmatic authors of our time.

Set amidst the colourful backdrop of mid-20th century New York, Rebel In The Rye follows a young Salinger (Nicholas Hoult) as he struggles to find his voice, pursues a ... more...