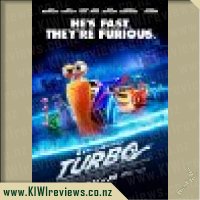 From the makers of MADAGASCAR and KUNG FU PANDA, TURBO is a high-velocity 3D comedy about a snail who dares to dream big - and fast. After a freak accident infuses him with the power of super-speed, Turbo kicks into overdrive and embarks on an extraordinary journey to achieve the seemingly impossible: competing in the world's fastest race, the Indianapolis 500. With the help of his tricked-out streetwise snail crew, this ultimate underdog puts his heart and shell on the line to prove that no dream is too big, and no dreamer too small.

What more could you ask for in a movie? Speed, Racing and Fun! Something to make us laugh and entertain the kids! Its a great movie with a heart warming story line and lot's of laughs.

The only complaint I have is it seemed to drag on a bit too long towards the end other than that another great DreamWorks film! Great movie to teach the little ones about determination and to believe in their little self's with funny memorable characters. Turbo also had a feel good soundtrack, it has a fantastic variety from Snoop Dogg to Tom Jones so something for everyone!

All the kids that were at the theatre stayed glued to the screens till near the end where as I mentioned earlier it seemed to drag on. There was plenty of laughter and shrieks of excitement (mainly from the girls!) There was kids of all ages so it seems it would suit most kids and the adults had just as many laughs so providing you are a parent or adult that likes these types of movies I think it is definitely something for everyone! Not a horrible film to sit through to please the kids!!

I love racing movies and speed, even though I would never live out any racing fantasies it is always good to have a dream. My son actually saw this advertised and asked if we could go and see it, since it is really expensive to take a whole family to the movies I initially said no but then when the Watties Can Festival movies were announced Turbo was one so I said sure we could.

I loved the effects, they looked so real and the story had me hooked from the start. It did kind of remind me a bit of Cars (small town gets discovered or put on the map) but there is enough of a difference in the story for it to be great in its own right. I really liked how he never gave up even when the other snails were saying it would never happen and making fun of him.

I don't know who did which voice for which character, I find that when I know who was doing each voice I can't think of the character any more but keep picturing the real actor instead. I do know the voices were great and only added to the movie.

I have seen this movie twice and am planning on buying it on blu ray one day soon. I would recommend to anyone who wants a good laugh and to forget about life in general for a bit and who can let their imaginations loose and not worry about how possible it would be to get a snail to survive what Turbo did and then to race like that.

Noise is a black comedy about a man caught in the most impossible of conundrums: in love with his hometown, New York City, but driven mad by its noise. Transforming himself into "The Rectifier", David takes on everyone from the schmuck who ignores his own car alarm, to the city's most powerful citizen, the Mayor. As his daring grows, ... more...