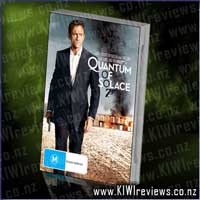 Disclosure StatementFULL DISCLOSURE: A number of units of this product have, at some time, been supplied to KIWIreviews by Roadshow (NZ) Ltd or their agents for the purposes of unbiased, independent reviews. No fee was accepted by KIWIreviews or the reviewers themselves - these are genuine, unpaid consumer reviews.
Available:
March 2009

Daniel Craig has made a pretty damn good James Bond. Being a 'blonde' bond, is very different to what I am used to, it is refreshing to see a spy that isn't absolutely perfectly charming, intelligent, and one step ahead of the supervillain. I fact there isn't even a supervillain; just an ordinary bad guy. I enjoy seeing a lead role, where the character actually is flawed. Noone is really that interested in seeing a perfect hero crush his adversary. We need some losses, followed by nitty-gritty revenge.

Moving back into reality, this movie covers the way that a top secret government agency would run. Apprehensive to just fling out money for the sake of it, trying to remain secret, these are the things that a spy agency are meant to do. Deal with things covertly. Quantum of Solace has a real threat that is more of a local threat as opposed to a global domination get-up, which I again found refreshing.

The visual effects are seamless, and I very much enjoyed the varying environments encountered. I will admit it is not as exciting as its predecessor, Casino Royale, but still an enjoyable film that contains the usual Bond necessities; the action, the gadgets, and the love interest. Definitely worth a watch.

I LOVED this movie. This would have to be my favourite out of all the Bond movies, and yes I have seen them all.

When I saw the trailers I knew that it was one that I would have to see on the big screen, and boy oh boy was I right. I really wanted to see it as I knew it was a revenge movie, so there wouldn't be a huge amount in the way of plot. Simply a, these men really pissed me off and they need to pay.

The special effects were amazing, and he movie wasn't short on explosions, car chases and chases on foot. Everything you'd expect from a Bond movie and more. The only problem is that it leaves me wondering if the next Bond movie can live up to this one...

This is a must if you enjoy Bond or Daniel Craig.

I have been a James Bond fan since as long as I can remember... I have seen them all, and have them all in my collection. There have been some great classics, such as "Moonraker" and a few amazing flops, like "Die Another Day" (despite being directed by our very own Lee Tamahori, it was a horrible job!). But by far my favourite Bond of all time (Sorry Sean) is Daniel Craig.

His gritty, no-nonsense demeanour is perfect. He still gets the ladies in true Bond style, but he's not all gushy and corny about it, with eyebrow-wiggles at the camera and sly half-grins. The 'rougher' style of this, and the previous movie - "Casino Royale" - are far more believable and true-to-life, especially as the range of super-toy gadgets is down to actual common-day tech level, instead of super-advanced gadgets that we can only ever see in Governmental test labs.

I was particularly impressed by the way in which the bad guys were clearly just bad guys, out for power and money by normal means, not a bunch of mad supervillains, stocked to the gunnels with weapons of mass destruction and hyper-robots of doom, etc... it's actually quite a refreshing revamp of the "James Bond 007" franchise, and a timely one indeed, bringing to light that the real evil in this world is the influence of greedy people out for all they can get, despite the abuses they heap upon the rest of the world.

Overall, one of the best movies I have ever seen, and certainly agree that it is the best 'Bond' movie yet! 22nd in coming, 1st in 'coming through'.

Set in the 23rd century, Luc Besson's The Fifth Element takes us to a world vastly different from that which we know today.

For ex-Marine Korben Dallas (Bruce Willis), life has become tediously repetitive: he drives a flying cab for a living, and eats take away from the same Chinese restaurant, which delivers directly to his window, every day. But little does Korben know, a great extra-terrestrial Evil has teamed up with Zorg ... more...