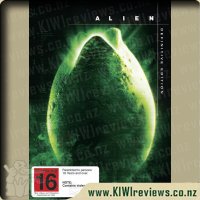 Alien is the movie that sparked a rush of sequels, aided a few crossovers and set the tone for many movies to come, it also cast a perfectly capable, strong female actor for the lead role, something that feels like we are missing out on these day.

At the most basic level "Alien" is a movie about things that jump out of the dark and kill you but it is also so much more than that as the characters are genuinely curious about this creature whilst at the same time their terror of it grows until Ripley decided that she wouldn't listen to the bosses orders of bringing the alien back to Earth, but instead to kill it. Alien is a movie that takes its time with the audience, there's no big rush to just jump out at you and bump up the kill count in huge bursts of death.

The characters also feel much more real, between the arguing, fighting, checking up on each other, concern and so on ups the believability. Throughout the movie the Alien keeps changing thus adding another element to the movie to keep you hooked, since you want to know how it will end up looking like once fully grown. The special effects are pretty darn good, since the alien is in the dark the most there wasn't much risk for going wrong and it makes the Alien even more terrifying. I'd say one of the biggest special effects moments is when the infant Alien bursts out of John Hurts stomach (a moment that has been parodied many a time, my favourite being in Spaceballs), it does look a bit fake but that doesn't take away from the effect of it at all.

The result is a film that absorbs us in a mission before it involves us in an adventure, and that consistently engages the alien with curiosity and logic, instead of simply firing at it, I miss this type of movie.

Four years after taking a bullet in the head at her own wedding, the bride (Thurman) emerges ... more...