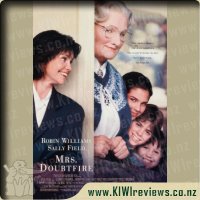 How far would an ordinary father go to spend more time with his children? Daniel Hillard (Robin Williams) is no ordinary father, so when he learns his ex-wife (Sally Field) needs a housekeeper, he applies for the job. With the perfect wig, a little makeup and a dress for all occasions, he becomes Mrs. Doubtfire, a devoted British housekeeper who is hired on the spot. Free to be the woman he never knew he could be, the disguised Daniel creates a whole new life with his entire family. Outrageous, hilarious and often touching, Robin Williams makes this box-office hit a film to be watched again and again.

I totally love Robin Williams so when the movie first came out it was a no brainer.. I was going to see it and I don't think I have laughed so much in ages.

I did feel for Daniel as it is hard being apart from your family and he was trying to juggle so many things and not get caught. There were some really funny moments that were so well played. I have the DVD and watch it over and over whenever I feel the need for a good laugh.

The cast did a great job of not laughing at the wrong time, not sure how they do it with such a straight face. I would recommend this movie to others, there are some serious topics covered but not done in such a way that it would offend and everybody needs a good laugh once in a while.

I'm not sure I liked the ending, there are so many ways it could have ended, both good and bad. Glad that the writers didn't go for the bad endings. I would have liked to see how things went in a few years but don't think there is going to be a sequel, there are so many directions that the movie could have gone in. Overall a great movie but then I would say that as I'm a huge Robin Williams fan, having seen a lot of his other movies.

I was five years old when I first saw this, and at that age I thought that a man dressing up as a woman was a great laugh. Twenty years later and I still really enjoy this movie, for a whole lot of different reasons.

Daniel hasn't been that great of a husband and he ends up getting kicked out of the house by his wife. He feels that he isn't getting enough time with his children and so when his ex goes to put an ad in the paper for a nanny he quickly changes the number so no one can call. He proceeds to create Mrs Doubtfire and hilarity ensues as he tries to find a job, spend time with his kids and have no one find out what he is doing.

Robin Williams does a great job as Daniel and his wonderful voice acting comes into great play here, not only as Mrs Doubtfire but also with a few other voices he injects along the way. The three kids do a great job and you really feel for them and what they are going through. Sally Field plays Daniel's ex and does a great job at it as the mother who wants the best for her kids but also doesn't want to take the kids away from their dad.

One thing I have always loved about this movie is the lack of a perfect ending, which to me makes it even better. A great film and one I will play for my children.

Set in 1960s Baltimore, the story follows a plump young girl named Tracy Turnblad (NIKKI BLONSKI, in her acting debut) on an amazing journey as her dream of dancing on the popular Corny Collins Show becomes a reality.