ProdID: 3722 - Rise of the Guardians
Directed by Peter Ramsey and William Joyce 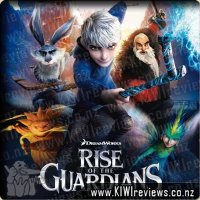 Disclosure StatementFULL DISCLOSURE: A number of units of this product have, at some time, been supplied to KIWIreviews by the company for the purposes of unbiased, independent reviews. No fee was accepted by KIWIreviews or the reviewers themselves - these are genuine, unpaid consumer reviews.
Available:
in cinemas from January 3rd 2013

Rise of the Guardians product reviews

When the evil spirit Pitch Black, the personification of fear also known as The Boogyman, launches an assault on Earth, the Immortal Guardians - Santa Claus, the Easter Bunny, the Tooth Fairy, Jack Frost and the Sandman - team up to to form a united front and protect the innocence of children all around the world.

In our house we believe in the Easter Bunny, Father Christmas, Sandman and (my daughter is eagerly waiting for her teeth to fall out so she can be visited by the....) Tooth Fairy.

When we heard there was a movie which combined all of these very special people we all could not wait to see it. Although dark in places and a little scary this is still a really good movie. Both my girls and have seen numerous times, but my daughter still gets upset when Sandy becomes bad.

Jude Laws voice for the Boogyman is perfectly cast and gives such a chilling performance. Actually, I enjoy all of the voices except for Santa Claus for some reason he just doesn't seem to work for me. Would of preferred something not so deep and foreign. But our favourite would have to be Hugh Jackman as the kick arse Easter Bunny, he gives it an Australian touch and he is just so big and adorable.

When the Boogyman sets to attack earth, the moon sends another guardian to help fight the terror and keep all of the girls and boys safe. It visually is very impressive and very well done, but definitely not all unicorns and fluffy clouds is rather dark and a lot of fighting. Its not too bad for the young ones but find they need reassurance when Sandman is taken and the poor Tooth Fairies.

Favourite scene would have the be when they are all competing in collecting teeth. All patronising and putting the other one down, very funny and very well done. I really like the inhouse fighting between them all, all believing they are busier than each other and way more important. The yetis are very funny and find they are way cuter than any elf could be. Really good movie.

This movie is one of the family's favourites. Unfortunately, because we don't have much patience to watch a two year old and a five year old quibble in a movie house, we watched this at home. We have this in dvd and also in blu ray because of course you want to see the effects as clear as possible.

The movie starts with a tugging scene on Jack Frost and how he became Jack Frost and "invisible". It was a bit hard to explain this to a 2 year old but that's ok because she wasn't really watching for the plot. She just wanted to see Santa, the easter bunny and the tooth fairy. Having Santa as Russian (?) was a nice touch too, connecting it with the Russian dolls and that message about looking for what your core is. The story was easy to follow and had lots of lessons to impart on the children. Nothing was too scary to scare the children. Even Pitch Black was tolerable and wasn't nightmare-inducing. The kids have seen this movie more than ten times now and we also have the digital version so its portability is maximised.

And with Frozen coming out, there had been a cross over between the two stories. i.e. Jack Frost is actually Elsa's boyfriend, and that they were star crossed lovers (there's a lot of back story in youtube -- but that's another review). Anyway, because of that, even now, we get to see this movie over and over again.

These days it is all too common for the trailers to basically be the best bits compiled into a short film... and if they put the clips in plot-order, you really wouldn't need to see the movie at all. This was NOT one of those movies.

As a child I was raised with the same myths... the Easter Bunny, Santa, the Sandman, Tooth Fairy... Jack Frost though was something I first encountered as an overly-cheesy Michael Keaton movie in 1998. The things we do, and the rubbish we will pay good money to go and see, to please our girlfriends. -shudder- So this was a wonderful new twist on the mythical "anthropomorphic frost spirit" - in fact I have to say I loved pretty much all the characters - Santa as a machete-toting, rough-as-nail, slavic-accented rough-talking butch mountain of a man, The Sandman as a creature who speaks in icons and ideograms manifested above his head from dream sand, the Easter Bunny a 6ft tall, Australian-accented hard man of a fluffy bunny, and the Tooth Fairy which, frankly was more of a demented cross between a dental nurse who has sucked a bit too much giggle-gas and a hummingbird with a primary-colour mania.

And then we have Jack... the ultimate waif - no memories of anything prior to his incarnation as the Spirit of Winter, who's only "power" is the ability to make ice form anywhere he chooses, and a sense of mischievous fun that would make Puck himself blush in impotent embarrassment... but because no-one really believes in him, he is immaterial and effectively invisible. And this led me to think that the whole manner of "I am as real as my believers make me..." was handled very similarly to the Great God Om in the Terry Pratchett Discworld book "Small Gods" - wherein a God can exist in any number of forms, but it takes more believers to keep a God big and strong... as belief wanes, so does the God.

So, with revelations cascading throughout the story, and the "bad guy" being The Boogieman - aka Pitch Black - and his army of Night Mares, this team of five has to somehow defeat Fear itself. You can't defeat fear, but you can take away it's power over you... and that's what it comes down to in the end... one mythical army trying to disarm another mythical army, in a war for the hearts and souls of mankind... via the children.

Overall, this was a great movie, and I now regret my decision to go alone. Mr12 would have loved the action and comedy scenes, as well as appreciating the CGI work. Mr4 would have just loved the whole thing - bright colours, tension and drama, fights and action, horses and unicorns, giant rabbits and self-guided walking Easter eggs, the giant yetis and the tiny but adorable elves - which played a very similar role to the Minions in "Despicable Me". The plot was detailed enough to give it a good 'mind feel' without being packed full of intellectual humour, and the ratio of sparkles-for-the-littlies to action-for-the-older-kids was spot on IMHO. I plan to go again, and take the family this time... or the kids at the very least.

My daughter has been waiting all summer to see this movie. It looked to be the "Christmas" movie for 2012/2013 so I was keen as well. The trailer shows a lot of magic, fight scene action and fun. We went to see it yesterday in 2D because my budget didn't stretch to 3D for the movie. With all the fights and flying around that the characters do, I reckon the 3D would have been a pretty exciting addition. Still, the movie was great without it as well.

We sat down to watch the movie and my daughter was engaged with the screen right from the start. If the movie was boring, she would disengage around the 30 minute mark. But she was watching the screen intently almost the whole way through. The only time she disengaged was when some scary things happened (remember, there are fight scenes) but she was still watching, just from under the seats instead. Afterwards I asked her what she thought and she was bouncing with excitement about the movie. She liked the different interpretations of our favourite guardians. Santa is now North, an impressive muscular dude with tattoos. The Tooth Fairy looks colourful like a parrot. Sandman sparkles like golden sand. The Bogeyman is an imposing figure in black.

I was shocked when I saw that North was played by Alec Baldwin. It did not sound like him at all. Bogeyman did sound like Jude Law though, but that's not a bad thing. Why do bad guys always sound so hot. As a kids movie I was very entertained. I laughed heartily at some bits, only to find my daughter looking at me strangely. I also teared up a bit at some parts. This is a PG movie, apparently for language but I didn't notice anything really bad. Things happen that are sad and could affect a child if they are very sensitive to violence, but there are triumphs as well and hope. The CGI effects brought the magic to the screen in such a fantastic way. I loved watching the dreams, and Jack Frost's icy antics. I'll definitely be looking to own this when it is available.

"It was great when it all began..." Celebrate 25 years of midnight movie madness!