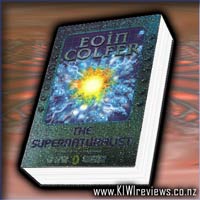 'We need to kickstart his heart.' Stefan pointed the weapon at Cosmo's chest. 'You sure?' 'No,' he said, and fired.

14-year old Cosmo Hill longs to escape from the Clarissa Frayne Institute for Parentally Challenged Boys. When his chance comes he grabs it, but things go fatally wrong. Cosmo feels his life force ebbing away, sucked out of him by a strange blue parasite... until a wisecracking gang of kids burst in, blast the creature, and save him.

They are the Supernaturalists and Cosmo's new life with this unlikely 'family' is about to begin...

Cosmo Hill, through a bit of luck, manages to escape from the Clarissa Frayne institute and joins a renegade band, The Supernaturalists, who now become his family: their job? To hunt these little blue creatures who suck the energy out of people and hasten their Death.
Eoin Colfer has created a strong character in Cosmo accompanied by a strong but eccentric group of characters and villains and, in the process, has written a highly readable book.
His imagination knows no boundaries and his humour permeates every aspect of the book, some subtle, some satirical, some very much tongue-in-cheek and some, way over the heads of the children it was written for; and for this reason, it is not just another children's book. As is common to all of Colfer's books, they run along at a cracking pace making it very hard to put the book down once started. Colfer seems to be very much at the start of his career, and I look forward to reading a long and full career full of well-written, readable books generated from the magical pen of Colfer

The Star Gate is destroyed.

The Star Dance is dead.

Enchanters, gods, and humans alike are helpless as the TimeKeeper Demons lay waste to Tencendor.

There must be hope left, but no one knows where to find it. Death lurks in every twist of the Maze, but only those who have the courage to endure death can learn the secrets of the ancient enemy. Caelum and his parents go to Star Finger, hoping to discover the ... more...