Quest for the Rotten Egg review 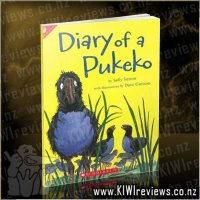 Disclosure StatementFULL DISCLOSURE: A number of units of this product have, at some time, been supplied to KIWIreviews by Scholastic (NZ) or their agents for the purposes of unbiased, independent reviews. No fee was accepted by KIWIreviews or the reviewers themselves - these are genuine, unpaid consumer reviews.
Available:
April 2011

Diary of a Pukeko product reviews

Humorously written diary of young pukeko as he trains for the annual Swim-Fly-Run triathlon event in an effort to beat his arch rival, Billy Flicktail the weka, and win the attentions of the gorgeous Indigo Tuk-tuk.

Great cover picture. Scattered diary entries as most people tend to keep one, not writing every day. The story uses very descriptive plumage.

Children and adults for that matter, that live in the north would recognize the tearooms on state highway one, north of wellsford.

I love the fact that this book can be read as a day by day entry (as in one days entry per day) or as a whole book with a happy ending.

As this was a loaned book to do this review - if KIWIreviews has another copy of it, i would happily give it a new home. I would also re-read it often (as i have done with this one) and think my grand-children would love to have it read to them.

We read this book thinking it was for young children, but soon found it was perhaps more suitable for tweens and teens. It's funny and well-written but with fairly adult humour.

Diary of a Pukeko is exactly that, entries from a year in the life of what seems to be a young teenage boy Pukeko. Throughout the year he grapples with his admiration for girl Pukeko Indigo Tuk-tuk, boyhood rivalry against Billy Flicktail, and dealing with various family issues and responsibilities.

It's a quick read since each chapter is a journal entry of only a page or two. I tried reading this book aloud to my boys (aged 5 and 7) but they didn't understand many of the references and much of the humour. Diary of a Pukeko is definitely well written, subtle and funny for adult readers, with plenty of Kiwi-slang. And you learn about how Pukekos live and what they eat through references throughout the story.

While my kids weren't too impressed, I enjoyed this light story humanising Pukekos.

'The last one had to pull a string and make a light come on.' This instantly makes me think of a power company ad and I wonder if the author has done this purposely. This easy to read book is what it says it is and is written to the point the pictures come to life forming images in your mind.

Although I think this is aimed at an older age group of kids, I believe the younger ones will enjoy the story being read to them. I had my 11 year old reading the book as well. I'd like to see more stories about the pukeko life even though i'm not really that fond of them and their interesting adventures. An added bonus for me is that it is a New Zealand book, not written by someone who thinks they know what New Zealand is like.

It's been only months since Eragon first uttered "brisingr", an ancient-language term for fire. Since then, he's not only learned to create magic with words, he's been challenged to his very core.

Following the colossal battle against the Empire's warriors on the ... more...