« The Call of the Wild review 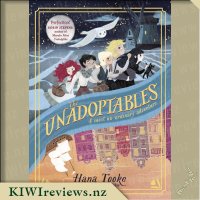 When a corrupt sea captain threatens to make them his minions, Milou knows it's time to plot a daring escape. But she has no idea their caper will begin with a crime, or that it will take them down back roads and alleys, along frozen canals, to an old windmill housing an abandoned puppet theater, where the truth about her origins lies hidden if she can only untangle the clues

But with the sea captain hunting them down, and a nosy neighbor threatening to reveal them to the authorities, the unadoptables will have to work fast to uncover the truth and find a way to save each other.

What Do You Need Little Rhino?
Rating: 9.6

Little Tulip Orphanage has three rules for leaving your child behind, one year all three are broken in various ways and thus she ends up with the five, the unadoptables, not just due to how they were abandoned though, each child as they grow is unique. Sem, a boy who can hem and sew (not something a lad of the 1890's should be interested in), Egg, the groups artist/map maker, Lotta who has twelve fingers and has a mind for mechanics (again, a no go for her time period), Fenna, a mute and lastly Milou with unusually black hair and eyes.

The story follows the five kids as they end up running away from the orphanage in a bid to find Milou's parents, as she firmly believes that they only left her behind for her safety. The kids don't travel too far before attempting to start their new life with the few clues that they have, but of course needing to evade those who would send them back to the orphanage or worse, to the man who has 'adopted' them. The ingenuity of the kids and what they put together is quite fantastic but because their characters have been so well developed it feels right and fits in well.

The dangers keep coming, the plot moves along as a bit of a roller coaster at times but this works well as it stops the book from slowing down too much and keeps things interesting. Whilst Milou is certainly the driving force of the book, the other four kids share the stage almost as much as she does, they are integral to the story. The friendship between these five was the loveliest part of the book. There are elements of the supernatural here but it's nice a gentle, other than one part at the end which was never really explained.

This is a good debut for a new author, I look forward to seeing what Tooke writes next.

Snakes are part of an extraordinary group of cold-blooded creatures called Reptiles. Over time their bodies have adapted to help them survive.

This fascinating exploration of this diverse species is packed with full-colour images, information, and links to further reading and resources, so that you can better understand this often misunderstood citizen that shares this planet with us.