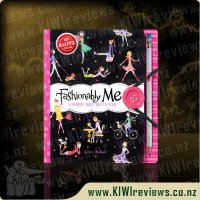 Fashionably Me is a prompted journal for girls that makes self-expression nearly irresistible, even for reluctant writers. That's because it's a theme so near and dear to most tween's hearts: fashion - from tiaras to tennis shoes. Real style doesn't come from a magazine, it comes from being - You.

I gave this to my 11 year old niece to test out for me. Her eyes lit up as soon as she saw it. She is a diary and stationery queen! The fact that she spent the next couple of days at my house with the pencil in her hand and he nose in the journal goes to show that she loved it.

Some of the things that she specified that she liked were the fact that some of the pages guided her to fill them in, while others were free pages for her to do what she wanted. She loved being able to dress up the characters in the book too. She found it fun to answer the questions and to fill out the little forms and check boxes in there. It is a bit of practice for later in life when they have to fill in forms. Kids love to mimic the tasks that adults have to do. My nieces even thought that she might design something in the journal that she could sell one day - heres to the early days of fashion for her.

The journal itself is really well made and built to last. It is attractive to look at and the button at the front is really stable. She has previously had journals where the fastening device has fallen off and prevented the book from staying closed with the elastic. I don't think that this button is going anywhere. The girly pink and classy black join together to make something that appeals to a wide age range of girls. It doesn't look too young for the early teens to be interested in. My niece already knows and loves the brand - "I love Klutz, they make the best books". Personally, I am new to the brand as I still have very young children but it is obviously something that the kids my niece's age are familiar with and love.

This journal is girly but allows the girls to make their own decisions about fashion. There are over 100 pages of creativity prompts to help girls think about what they like and to design their own fashion. It gives plenty of scope for creativity and I think it is the perfect fit between a blank journal and a very prescriptive journal (question answer type journal). There are plenty of prompt words to help the girls if they need to help but in the end it is up to their own creativity and imagination.

I think that it will be something that my niece will add to and treasure for many years to come. It will be interesting to keep and to see how she relates to her thoughts in the future. The journal is all about her and something precious to have.

The pencil attaches to the journal so you can keep the bits together and it makes for a great activity to take away. My niece was so stuck in the journal that she took it out to lunch with us so that she could entertain herself. While the boys in the group chatted away, she could add ideas to her new fashion collection.

I am glad that I could share this book with my niece as she just loved it and said that she would recommend it to girls around her age (as well as those younger and older!).

My daughter is all about fashion and style now she has hit the "tweenage" years scary to think only another year and she will actually officially be a teenager gone are the days where I had some choice in what she wore, luckily for me her fashion sense isn't too outrageous although it is totally her own style. When she seen this book pop up for review on the KIWIreviews facebook page she was instantly in love and made me apply to review it straight away. The time waiting to find out if we were chosen as the lucky reviewer was so intense with the constant have you heard yet, have you heard yet!

So when we did get the call that yes we were very lucky indeed and had been picked to review this journal the squeals of delight could probably be heard in even the distant neighbours houses. That was it then the planning started straight away. She headed for the table magazines and paper in hand and started cutting out pictures of her favourite clothing items and accessories from chuck taylor high tops to pretty tulle skirts, and drawing pictures of the pieces all woven together. Believe me that night it was very hard to get an over excited 11 year old girl to bed, at gone 10pm, but at least it was the school holidays!

As soon as the parcel arrived with our goodies inside it she rushed it inside and ripped straight into the packaging to retrieve her very cool new journal, don't tell her I told you but she even gave it a big kiss once it was safely in her hot little hands. Love at first sight I think and the pages were quickly checked over and bits completed, over the past few days she hasn't put it down carefully planning what summer outfits she would like and what she would accessorise them with. The journal is really cool with prompts on such things as designing your own high top shoes (right up her alley) too creating and colouring your ideal fabric swatches.

It has opened up so many interesting conversations as it asks her to ask her parents or equally as ancient person what their fashion style was when they were younger. She thought the 'ancient' comment was just brilliant! So we talked shell suits and jelly shoes, leg warmers, and fluro tee shirts. She also talked with granny about hot pants and shoulder pants and equally 'so not cool' items of past fashions.

The thing I thought was great about the book is that it is all about your own personal style and individuality not telling you how things should be or following particular trends. There are some really neat quotes weaved throughout the pages from various fashion people and young stars like Taylor Swift and Coco Chanel. My daughters favourite one was "There is nothing interesting about looking perfect' Emma Watson. I really liked the quote "Unique and different is the next generation of beautiful" Taylor Swift.

I think it is really cool that they have included quotes such as these from young stars that young girls will know about as they are things that young girls should learn. We love this journal and would recommend it to girls of all ages!

My children and myself have always been huge fans of the Klutz series or books and kits. My boys adored their Klutz diaries received via KIWIreviews a year or so ago, and my daughter was over the moon to receive her very own Klutz journal last week. What an awesome journal. Like all Klutz products, they are funky and beautifully presented, instantly catching the eye.

This lovely journal is hard cover with hot pink elastic band and button closure, complete with a funky good quality sparkly pencil. And best of all the focus is all on the journal owner. Not any of this 'you must be skinny and eat salad noncense', but 'you are perfect as you'. It is a fantastic journal full of prompts and cues for the journal owner to record their thoughts and feelings on fashion! What they love, enjoy, and think. Nothing telling them their taste is wrong.

My daughter is 7 and this journal is not to over her head, her 10 year old friend also wants one and her 13 year old cousin thinks it is absolutely awesome, as do I. So when it comes to girls and fashion...you are never to old for a fashionably me journal by Klutz. Perfect gift idea that would be well received also.

They died with smiles on their faces. Three apparent suicides: a brilliant engineer, an infamous lawyer, and a controversial politician. Three strangers with nothing in common--and no obvious reasons for killing themselves. Police lieutenant Eve Dallas found the deaths suspicious. And her instincts paid off when autopsies revealed small burns on the brains of the victims. Was it a genetic abnormality or a high-tech method of murder? Eve's ... more...