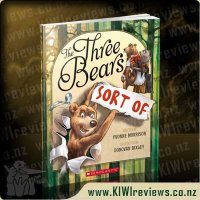 It is pretty fair to say Goldilocks and the Three Bears is a little far fetched. Think about the porridge scene where the mumma bear makes the three of them breakfast all at the same time and only one is too hot, one is too cold and the other is perfect. I love the story don't get me wrong but it was until the later years that I realised Goldilocks was actually a criminal who was breaking and entering and then stealing from the poor three bears.

I have to admit I love this book. I did not know it existed until last night at my daughters pre-school dinner, I saw it in the book stand and so this morning when I dropped her off we both sat down and I read it. I was laughing the whole time and she was just looking at me like I was weird. All the other children were looking over as I was near tears.

The illustrations are fantastic and its fair to say that I love Donovan Bixley. The pictures are just so vivid and are just perfect for the story. The story is the retelling of Goldilocks with some questions thrown in to the mix. Like what kind of bears where they and how did they get a cottage in the woods with working electricity? The answers are so funny and like I said I was in stitches.

definitely will be buying for the girls as it would be an awesome night time book where I read one part and my husband reads the other. It is a little hard to read the injections and do the various voices alone but I am sure with the two of us we could manage. A fantastic book that everyone should read.

I won this book a while ago and we decided to give it to our daughter for Christmas. At almost 5 she loves it and tries to read along. This book is excellent although I think it takes a good story teller to be able to read it out aloud effectively and not get lost in the side dialogue of the child asking questions.

For an inquisitive child hearing these questions being asked and answered is magic, it opens up a whole new world for them in terms of story telling and how they interrupt the books that they read or are read to them. The logical thinking of the "child" asking the questions definitely fits in well with the way my children think so they associate with the questions and answers well.

We took this book to Playcentre where I read it at the end of session, usually it's hard to hold the attention of the children who then run off and continue playing, however most of them sat happily (while eating) listening to the story, a few even tried to answer the questions themselves!

This book is a must have in the library of the inquisitive child as well as a story tellers collection. It's definitely refreshing to have a different spin on an old classic fairy tale.

I have to say I received this and was like oh lovely another three bears book (insert sarcasm) as a preschool teacher I can't even count how many different versions of the three bears I have read. I have to say though; it's as if someone was sitting in on a previous reading with a group of pre-schoolers.

It tackles all the questions that children ask, and it makes you laugh, and presents it in such a fun and authentic manner. I was really impressed with the fresh slant they had taken with the book, and the teacher in me was impressed with the provocation the book displayed, it naturally encourages children to think beyond the information they are being presented with!

The pages are rich in text and images, and it was a great read, that I look forward to sharing with many, many more children. I think "the three bears sort of " is great value and will become a favourite with children and parents alike. Please take a look beyond the cover and you will be presently surprised.

I have just recently won this book and thought o yay so cool, then read the title "the three bears (sort of)" Hmmm Sort of? how do you get sort of with the three bears? Well I opened it up and RIGHT away both my kids were circling me to read the story so we did.

Now unlike your other books you just read, this had something extra about it, special about it. It was like you were talking to the kids and they were answering you back it was a god laugh, funny thing was when I read the bits that a child would say my daughter (4yrs) would say yes mum how did they know, mum bears can't talk etc. I couldn't help but laugh some more.

The book is colourful, its funny, its child friendly and adult friendly, its amazing a good take on what a child would question for the story of the three little bears, I just loved the questions and the answers, just the story inside the story. You could always skip the child bits if you wanted to but it just wouldn't sit right.

Want a fun interactive book, then check this out.

Oh my gosh this book just has me laughing so much in a way I wouldn't have at all before children. It's just so how it is when you read a book!!

This is a fantastic retelling of The Three Bears with the most lovely glossy embossed cover. The illustrations are brilliant and my girls and I spend ages looking at the pictures when we read this. So the story is basically as though an adult is reading the story and then a child constantly interjecting with questions. The illustrations support the text really well and I loved that there were different styles of illustration.

Because of the complexity of the story ie. the story and then the adult and child having conversations, this was way too much for Miss Two to understand. Miss Four got it and Miss Six found it boring. So with Miss Two we just look at the pictures and talk about them (well I talk... she goes "what?" ). Miss Four loves to just "read" this to herself and finds it hilarious when I read it to her.

So overall I think probably best suited to ages three and up but a really funny book and a great gift.

We are huge Donovan Bixley fans in our house. I follow him on Facebook too, so I have seen sneak peeks of this beautiful book for a month or so. Getting a copy of it thanks to Scholastic and KIWIreviews made my year. The art in this book is utterly amazing. It surpasses even the art in the Looky Book. I just loved every page, there was so much to see. Details hidden into each picture as always. But more, Bixley really outdid himself with some parts in styles that don't seem like his work. It just shows you how talented and versatile he can be.

The author is Yvonne Morrison. Morrison has worked with Bixley a few times. They wrote The Tuatara and the Skink and Wacko Kakapo together. Her writing always makes me giggle. We own her Kiwi Night Before Christmas as well. Here the tale is the Three Bears, as read to a very smart child. In a lot of ways, it reminded me of reading a fairytale to my own daughter. She is always asking tricky questions or pointing out that something is not possible in a matter-of-fact kind of way.

My daughter loved this book and claimed it to be very funny. She loved looking at the pictures, especially of all the bears. She thought the baby bear in his little suit was adorable. We have read it a couple of times, and each time have chuckled along at the funny answers from the "parent" reader. For her, its a funny picture book to enjoy with me. For me, its the reality of today's kids and parenting in general. A fantastic retelling and thoroughly enjoyable.

THE EMPIRE STATE IS THE OTHER NEW YORK.

A parallel-universe, Prohibition-era world of mooks and shamuses that is the twisted magic mirror to our bustling Big Apple, a place where sinister characters lurk around every corner while the great superheroes that once kept the streets safe have fallen into dysfunctional rivalries and feuds.

Not that its colourful residents know anything about the real New York... until detective Rad Bradley makes a discovery that will change the lives of all its inhabitants.