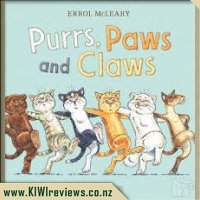 Hey-diddle-diddle, the cat had a fiddle,
but played a really bad tune.
The little dog barked and had to run
when the cow threw a plate and a spoon.
A selection of limericks, and nursery rhymes revisited, with a pussy-cat spin on every one!

- A delightful collection of poetry for littlies
- Children love to recite limericks and nursery rhymes, and these give a fresh new look to
- some old favourites
- Humorously illustrated by the author

I had high hopes for this book. My 3 year old daughter is quite scared of cats so I'm trying to introduce her to as many friendly cats as I can and I thought a cute little book about cats would be great for her.

Purrs, Paws and Claws is a book full of cat poems and nursery rhymes. Basically the author has gathered some well known rhymes and changed them to cat references such as "Hey-diddle-diddle, the cat had a fiddle, but played a really bad tune..." not quite the nursery rhymes we know and love but kind of cute if you like cats.

On the first night I managed to get half way through the book with my 3 year old but I had to concentrate quite hard on reading the sentences correctly, I wanted them all to rhyme but very few actually did and I don't think there were any that my daughter could participate in or understand. There were a few poems that made no sense at all to me so I'm not sure how interested a child would be, I know my daughter wasn't.

The next night I pulled out the book again and my daughter actually wanted to read something different so she obviously wasn't impressed by this book either. I can't really blame her, I think the target audience would be much higher than a 3 year old but I'm also not sure of what the target audience would be because the poems are too intense for young children but the age that would understand them wouldn't be interested in reading a book on cat poems.

The only saving grace with this book is the beautiful illustrations on every page. My daughter enjoyed looking at the pictures much more than hearing the poems and would often interrupt me to point out something cute she saw on the page.

As a child's story book I wouldn't recommend it but as a cute kitty picture book I would definitely say to have a look. My daughter does still pick it up every so often to look at the pictures but it is never her first choice for bedtime story. My rating for this book is based on my own personal experience with it and how much my daughter enjoyed it. If you are an avid cat lover then, by all means, have a look at it and write your own review!

I have this theory that approximately half the people in the world are cat people and half are dog people... so based on that theory you might assume that a cute little poem book about cats could appeal to a good chunk of the population.

As I am in the cat person category myself, and because I love poems for kids as they are a great learn to read tool, I was keen to try this book out in exchange for writing a review...

The book is basically a book of poems - pretty much one per page, and all about cats. It started off with limerick after limerick, some a little funny and some not really at all (although maybe they were meant to be.) I read the entire book in one sitting to my 5 year old and I noticed that some poems went straight over her head, such as 'The Da Vinci Cat'. In fact, I found myself making a running commentary as I read and giving a few forced giggles here and there, just to make it a little more interesting for her, but I don't think she was terribly engaged. And I can't say I was terribly enthused by the book either.

Then the book got thrown off on a tangent when it seemed the author had run out of limericks and had cottoned onto the idea of adapting well-known nursery rhymes and putting a cat twist on them. Or if they were already rhymes about cats (such as the owl and the pussycat) then they would get adapted even further. It felt like a strange way to divide the book - almost like you could feel the author's thought process, which isn't always bad, but it just didn't feel quite right in this case.

The pictures however were quite delightful and I found myself enjoying these far more than the actual poems. I read that the author used the book and his sense of humour as a way to bring his illustrations to life and knowing this helps the book make a bit more sense to me.

We now avoid this as a bedtime story book but have it available so that my 5 year old can pick it up and choose the occasional poem for me to read to her, or for her to attempt to read herself, so I give the book credit for helping emerging readers. I've given this a fairly average rating because I don't hate it, I just don't love it either... but maybe it's just me. Feel free to give it a go and prove me wrong... especially if you like cute illustrations of cats doing silly things and/or have a zany sense of humour.

Set in the near future, this first book in a fast-paced trilogy will hook you in from the first page.

Violet Black and Ethan Wright are both in a coma after contracting the lethal M-fever. They have never met:

I couldn't speak, but I was trying so hard to communicate and then . . . then . . .
I pushed. And something, someone, pushed back.
Her name is Violet. Violet, but she is sunshine-yellow, and I need to ... more...