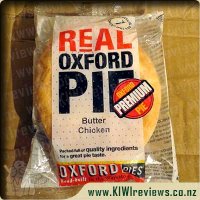 I like it when manufacturers of pies take something that is great tasting by itself normally and then put it into a pie to make it even more awesome, this is what Oxford has done with it's butter chicken pie. Now if you don't like butter chicken, then don't eat this pie. As the name suggest it has butter chicken in it, and to get a good butter chicken you need the chicken the spices/flavouring and a good sauce this pie ticks all the right boxes.

I really liked this pie and I think it had to do with my like of butter chicken, and alsot the fondness of pies, so it worked really well for me. I liked the level of spicyness involved and the flavour was really good. It is a very fragrant pie so if you are eating in a confined space it might not be the best option for you or your workmates, but apart from that it is well worthy of your money, go out and get one now.

By far one of the best Butter Chicken pies it has been my true pleasure to eat in over 5 years. I do so like a spicy pie, and as such Indian flavours are high on my list... but it strikes me as strange that "Butter Chicken" is about the only flavour I come across with any regularity. Still, it *is* my favourite flavour of the curry gamut, and so I won't complain. Especially when it tastes this good!

Microwaving pies is always a risky business, in fact the same could be said of any pastry-wrapped meal-in-training, but these pies actually really surprised me with how well the pastry handled being microwaved, especially as there are no instructions for that method of cooking on the wrapper. When I asked the main man behind the manufacturing side of things - John - he told me that though they are aware the pies do "OK in a manner of speaking" in the microwave, they really don't think the pies are at their best unless cooked by heat conduction - which basically means "in the oven." Usually, I would agree, but I just don't trust my oven, and if I am going to test how a pie holds up, I want to test it well!

The filling is quite packed with chicken, while still having enough of the sauce to keep it from turning into a chewy, leathery mess in your mouth. I was pleasantly surprised by the big chunks of chicken evident in the filling - I was expecting something a lot finer, maybe even a slightly chunky chicken mince... but no, this was hunks of real chook - none of that processed mess made from the bits that no-one in their right mind would eat if they knew what it really was... you know the stuff, they make it into chicken nuggets and tender bites and things.

Overall, this is a seriously yummy pie, and I feel it's one of the highlights of the entire Oxford range... well, I'm really only guessing at that since I haven't tried them ALL... but I feel confident. If they have anything better than this in the range, I think I'll have to just give up on any other meal types and just go on an Oxford Pie diet.

I have always enjoyed a good Butter Chicken, but it all depends on the spiciness of it. So I was most eager to give this a taste thanks to my love of Butter Chicken.

There was a great amount of sauce, and once I ignored the spice of it, the overall taste of the pie was nice enough. The chicken was nice and soft, not chewy at all which was nice but a little softer would have been nicer. My husband mentioned that he would have liked a bit more meat in the pie.

Whilst this was a nice pie it was far too spicy for me and so I wouldn't eat it again. My husband said he would if there was nothing else to choose from.

I will start this review by admitting that I hate curry and was dreading eating the Butter Chicken pie especially when someone told me they were very hot. I had to try it because it was part of the box of pies I was given to review. Today I faced my fear and tried it. I was very pleasantly surprised. It was not so hot I had to grab a glass of milk. It had a nice kick to it and I ate the whole pie without duress.

The chicken was precooked which was good considering I didn't cook it for long enough so it was still cold in the middle. The chicken was very tender and there were no fatty bits. It has earned the title of a premium pie. Having tried this pie I am hopeful this might cure my life-long phobia of curry especially considering it wasn't oily either so there is no detox happening.

Thank you to Oxford Pies and KIWIreviews for allowing me to try these pies because just as our parents told us - you never know if you like something until you try it. I am certainly willing to buy one of Oxford's Butter Chicken Pies in the future.

The butter Chicken pie was the first one out of the lot that I tried, and one of the best. Butter Chicken is an Asian dish that I've always loved, and this pie was everything I had hoped it would be. The Chicken was nice, it wasn't "fall-apart-in-your-mouth" tender, but it wasn't hard and chewy either. The first thing that pops into my head when I hear about butter chicken is: "spicy"; well, this pie was spicy, but it was only a gentle heat, something that was actually quite pleasant.

This kind of Asian dish is okay on it's own, but I have never even considered the concept of taking the same dish, minus the rice, and shove it into a box made of pastry, and then sell it. But, as it turns out, a Butter Chicken pie is nothing to laugh at, it is actually better that having the stuff on a plate! Something I have noticed with all the food products that I have reviewed, or at least, the good stuff, the products always leave me wishing I had more. This pie was no exception, but I know that I still have a whole plastic bag full of pies to try, so, no sweat off my back!

The spice factor wasn't a big deal, but I actually took pleasure in experiencing that spice! The fillings were soft and flavourful, and having them in this pie is probably cheaper than going to the local food court and buying a plate of butter chicken there! The price is awesome, and I think that this is definitely a great snack to grab on the way up to Auckland or something! I highly recommend trying this pie if you're a spice-lover, you won't regret it!

One of my favourite things on the planet is a good curry. Its a work tradition to go for one for celebrations and I love it. Though I do not have a constitution to be having hot curries. I prefer a mild to medium heat only. If I go for a medium its usually Lamb Rogan Josh. But my favourite mild curry flavour is Butter Chicken.

Oxford pies offer the ultimate pie here. Its Butter Chicken wrapped in pastry. I cooked this up in the microwave for lunch on the weekend. I had been cooking them fairly successfully at work with a 4 and a half minutes on medium heat, then a minute on high. I tried the same at home, but my microwave is apparently not the same wattage. So at first the pie was pretty much cold inside.

I re-cooked it for a further minute on high and the pie was well cooked. The pastry was soft and flaky. However, the pie itself held up well. I found the bottom was still very firm and the sides were very stable.

The curry inside was quite a bit hotter than I expected. I would say it was a medium heat. It did bring on a curry sweat. So while it was nice, it was not quite as I expected. A true curry lover would really enjoy this. For me I would have this again, but with a yoghurt smoothie or something to help with the heat.

Now you can season like a real foodie or masterchef, without having to buy loads of expensive, exotic ingredients or wait for time-consuming wet marinades. Within minutes your favourite cut of beef, steak, chicken, lamb, pork, salmon, seafood and vegetables will be ready to barbecue, roast, pan fry, grill or bake. Out on the bbq or in the kitchen, ... more...