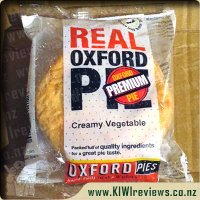 One for the vegetarians, this pie is packed with tasty veges in a creamy sauce. No animals were harmed in the making of this filling.

When I first heard the name of this pie, the first thing that pooped into my head was "veges with a creamy sauce", which for some reason didn't sound that great to me. But when I tried it, it was actually quite nice. The was no meat, so this is a vegetarian or dieter-friendly pie, that also appears to be good for those who aren't on any diet program or can't eat meat. There was a slight creamy sauce in there, but I could detect the flavour of it. Also the vegetables were perfect, nicely cooked, and they were mostly green veges, which I think are among the healthiest of the lot.

The pastry was good, it had a nice individual flavour, as with most pies I was quite content with saving some of the crust for last, just so that I could enjoy it's flavour. It was also firm, it held the fillings well and also seems to be solid enough to withstand being held while on the road. I never thought that I would enjoy having a vegetarian pie, but now I guess I was wrong; it is healthier than most pies, and it still has good flavour, I was quite happy eating this.

The price was fitting, this pie makes for an inexpensive, light, reasonably healthy and easy meal, no matter where you are. I am really impressed, and I think that at some point I should try this flavour again, and I highly recommend it for anyone, whether you're vegetarian or not. Enjoy!

Out of all the pies I was given to review the creamy vegetable was the only vegetarian one. Although I am not a vegetarian I have several friends and family members that are. It wasn't one I would have chosen in a bakery it made a pleasant change from all the heavier meat pies.

The pie was mainly potato in a very creamy but mild cheese sauce. I was surprised it hadn't been created as a potato top pie. The vegetables are not listed individually on the packet so I wondered if it might vary depending what is in season. Having read some of the other reviews it seems that even the pies available at the same time had different vegetables. My pie contained some silverbeet (or spinach I wasn't sure) carrot and peas but several of my bites were just potato.

Overall I enjoyed the taste and will be recommending it to my vegetarian friends.

I was really surprised by this one actually... I don't really know what I was expecting, but a pie with some real flavour, a nice sauce, and lots of veges wasn't it. Silly me, I should have expected it really, after all it's a premium-range Oxford pie after all.

Lots of veges... LOTS of them. And not just the cube-cut bulk-rate frozen mixed vege either... the pie was filled with decent-sized chunks of them, surrounded by a creamy white sauce. I understand why they couldn't make it a cheese sauce, but I think if they did another version for those vegetarians who can/will eat dairy, then a cheese and mustard sauce would be a simply amazing alternative!

Though I found the pie a little 'wetter' than my ideal pie, this wasn't overly off-putting really, it just meant that I had to take care not to pick it up and eat it, instead having it on a plate with some bread handy to act as a mop-up sponge. This meant I didn't waste a single bit of this pie, for which I am very glad. It really was an impressive pie, though, I should point out that though this pie may be acceptable to certain classes of vegetarians, it's unlikely to be acceptable to people who practice any of the "vegan" dietary options.

Overall, this was a pie that really surprised me in the best way... I may have to consider trying something like this in the #FoodLab next Winter.

I have a bit of a thing about vegetarian pies. I'm not vegetarian myself, but I have been known to buy a vegetable pie quite often. I just don't think that every meal of the day should involve meat, so I tend to limit myself where possible.

This creamy vegetable pie I microwaved at work. I put it in the microwave on a dinner sized plate. I put it in on half power for 4 and a half minutes as suggested by another reviewer. A co-worker walked past the microwave while it was cooking and said "your pie is getting taller". Sure enough the top of the pie was threatening to blow. I left the pie to stand for a minute and then gave it one last blast for 1 minute on high. Again, the top threatened to come off.

The pie was a wee bit soggy, but that's what you get for microwaving the pie. The pastry was still pretty crisp despite the top layer being soft. I loved the little pastry heart marking the top. It was the first piece I ate. Inside the pie, I found mini corn cob, carrot, cauliflower and a white creamy sauce. It could have almost been a cheese sauce, but I didn't really detect cheese. As the sauce cooled slightly, I noticed a bite which could have been hot English mustard, just a touch of it in the sauce. This wasn't the best vegetable pie I have ever had, but it was what I expected it to be. I would probably buy it again if I saw it hot and ready to eat.

Finding a pie that claims to be vegetarian and is actually fully vegetarian hasn't always been easy, so I was happy to see that this is indeed suitable for vegetarians.

Cooked this in the oven, waiting for it to turn that nice and golden brown that pies do, I was curious as to how it would taste. Cutting it in half I was pleased to see that it did look very creamy, and despite the wrapper saying cheese sauce mixture I couldn't really see that in the pie.

Biting into it I was very pleased to find that the vegetables were lovely and soft, not slimy and not too tough, just perfect. For reading that it was a cheese a would have expected a bit more cheese in it, not much, just a little bit. I also would have liked a smidgen more salt. Other than that it tasted just like my veges and cheese sauce dish that I make at home.

This was a nice pie, nothing particularly special, but it's good to know that there are some good tasting vegetarian pie options out there.

A vegetable pie probably isn't the first type of pie I would choose on my list of pies to consume, but I like to take one for the team and put this pie goodness into the oven to give it the correct cooking treatment it deserved, none of this microwave rubbish.

I don't really know what I was expecting to find inside a vegetable pie, but what I did find was vegetables, I saw corn, carrot, silverbeet and it was all covered in the cheese type sauce. Not exactly like what you would find if you were to make your own cheese sauce, but it was a good white sauce.

All in all I thought it was done quite well for something with no meat inside it. For a nice change it would be something I would try from time to time, and I think for the price and being in a pie most vegetarians would be happy with it.

SWISS DELI ® Veal Bratwurst is gluten free and does not contain genetically modified ingredients. The ... more...