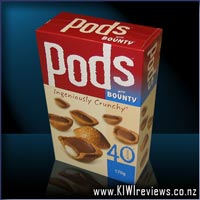 So that's why we created 'Pods' crunchy biscuit. They start off as biscuit wafer caups baked in our revolutionary Wakrone oven which makes them amazingly light and crunchy. In these wafer cups is a delicious Bounty filling. And in each pack are 40 of these delicate suckers - and they're bite sized.

See the genius yet? That's right. You can have one and eat it. And it tastes great. And then when your brain calls out and says 'Hey you, give me more of whatever that was,' you can reach in the pack and have another. And another. And that, my learned friend, is why enjoyment now lasts longer.

Bounty Bar fan? You will love these just as much!!

I have loved bounty bars for as long as i can remember so when these tasty morsels came along i was rather excited and eagerly brought a box to try! I was not at all disappointed ~ from the crunchy shell, bounty goodness and chocolate ~ be warned these are addictive! And if your anything like me, there's no stopping at just a few as a 'treat' ~ its the whole box!!

While i totally love these i have been really gutted that i cant seem to find them anywhere lately ~ only the other flavours in this range ~ just as good but not wonderful like these treats are! Yummmo!!

Wowee, wow, wow... These have been a regular addition to my supermarket visits since I happened on them. They are a nice combination of creamy chocolate (who doesn't love chocolate?), and a unique biscuity base that has just the right amount of crunch. Good work MARS for thinking of this great snack fod.

Bounty! Yum!
I love bounty bars and these pods are just delicious! I have tried these multiple times and i can say they are so irresistible! The combination of being bite size and the best flavour of coconut and chocolate makes a party in your mouth. These would be great for a party, or just a snack treat. I recommend these to EVERYONE!

small bites of yumminess. These treats are crunchy and sweet tooth treats which are great for sharing with mates. I find the wafer cookie does take away a wee bit of attention from the coconut and chocolate delight of the bounty taste but not enough to stop you from enjoying the mini morsels.

I've eaten a fair few myself, and handed them round to friends too, and while there was a comment made on the looks of them, the taste was never an issue :)

The Bounty ones I found to taste more like white chocolate than the traditional coconut that you associate with Bountys. I wasn't able to eat these with the ease of some of the other flavours - I found that this flavour was slightly over sweet and left a lingering taste in the back of my mouth.

But, still, something very tasty to snack on, just not to eat the whole box - as I did with some of the other flavours *blush*

I really enjoyed these wonderful new snacks. They are something so different that you just have to try them at least once. After that you will want to try them again and again. As soon as they were available in the supermarket, I went out and bough 2 of each flavour and took them around to a friends place for his family. We tipped them all into a big bowl and just grabbed them at random. As the night wore on and the kids went to bed, the bowl emptied a little slower until there were none left. No feeling sick, no sticky aftertaste in the mouth, none of the bad side-effects common after eating too many choccy bikkies. If you enjoy novelty biscuits, or want something a little different for your party, try Pods, I don't think you'll be disappointed in the least.

Having eaten four boxes of these things I can safely say that i know what they taste like. I can also say that I feel rather ill but that is beside the point. At first they struck me as rather gimicky without the long term appeal of more classical chocolate treats, that they should have been bigger and more buscuit like and with more filling. This view has been altered after extensive testing and thinking about where you would have cause to eat them. As far as a sit down and munch out on them snack with a movie they are not perfect, as after about half a dozen you don't want any more as they are quite sweet, even more so than normal chocolates thanks to the cereal like biscuit outer. However they make up for this thanks to the novelty value gained from trying to eat all the biscuit first or trying to separate the two peices (like pulling apart liqorice allsorts). I am of the opinion that they would be best suited towards a dinner party of some description, as they would fit in amongst the crackers and cheeses as well as the chips and pineapple pieces on sticks, small and interesting to tide you over till dinner. This I think is reenforced by the fact that they are packaged in a box rather than in a bag, even if this is just to protect the fragile pieces it elevates them to classy snack status, like those chocolate wafer sticks and magnum icecreams. Pods are a tasty treat, but not to be overdone, enjoy a few with a cup of (insert ridiculously named coffee beverage) and enjoy the moment safe in the knowledge that you are far trendier than anyone else in the vicinity. Or impress your friends and collegues with pre dinner nibbles and knock off the Jones' for First Place on the neighbourhood coolest dinner party list. For you ease and convenience I have ranked each flavour in terms of my preference. I'm not saying that this is The Be All and End All to these Flavours, it's just my opinion. Pods are labelled as "Ingeniously Crunchy" and while they are definately crunchy the ingenious part remains to be seen, they may not be my cup of tea, but then I don't drink tea either.

There is always a bottom place in any competition and unfortunately it has to be someone, the poor cousin of this chocolate bar family, how many kids when given the opportunity to pick a chocolate bar at the supermarket ever went for the bounty? These are the strictly for grown ups bars and the Pods are no different, the flavour is much more subtle and refined than the other flavours and would go well with a coffee, and don't get me wrong I liked them, I liked them alot, I just like the other flavours more.

I have always enjoyed Bounty bars... and who wouldn't? Moist coconut wrapped in delishimo chocolate? So when I heard they were planning to make it into a biscuit, I was a little dubious about their success. Then I saw them, pods, a box full of crispy Bounty goodness, with all the flavour, and a biscuit base to boot.

There were 41 pods in this box, and it only took a mere 38 to confirm that these were totally delightful. But alas, they lost a single point for the fact that though I could clearly taste that distinctive Bounty flavour, I could detect no trace of actual shaved coconut... which is a big part of the appeal of the Bounty bars for me... but then, after years of mouth-melting curries, one could expect texture to be a factor in any food I eat and enjoy.

The biscuit base was wonderful... light, crispy, flavoursome. The filling was full of flavour as well, giving a rich taste sensation, and the choc on top was just the ultimate finisher. As your mouth mushes this delightful confection around, you'll experience a whole new taste sensation you will adore.

Overall, a wonderful, tasty new treat from the great minds that brought you Mars, Bounty, and other such wonders. What are you waiting for, go buy some... your tastebuds will love you for it...

Not a huge fan of Bounty bars, but these biscuity things are great. All three parts, the biscuit base, just the right amount of bounty flavour, and chocky top make it a great little snack. Although eating a whole box in one sitting may not be the best way to eat them I found.

The inspiration for this salmon product comes from the Mediterranean where sundried tomatoes, olives and garlic are available in abundance. Once the ingredients are all combined, they are cooked slowly so that all that delicious flavour is locked in for your enjoyment.