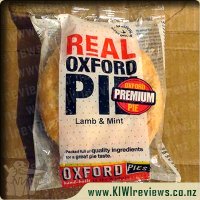 A classic Kiwi pie packed with real NZ Lamb and a generous dollop of mint sauce, then lovingly wrapped in a delicate puff pastry to hold it together long enough for you to wrap your laughing gear around it.

A lamb and mint pie is a real treat if you haven't had one before, but the trick is to get a pie that has been made with the correct proportions of ingredients to make sure you get the full lamb and mint taste explosion.

So, I heated up my Oxford Lamb and Mint pie, I always use the oven, it's the only proper way to get the pastry right. And I got into it, the lamb was really tender and great tasting, I was really impressed with that. I was just let down by the gravy/mint sauce combo.

There just wasn't enough mint sauce in my pie, it was like an afterthought to go with the meat and gravy and I couldn't really taste it, I wish there was more, so much so that I was almost tempted to go add some more mint sauce myself.

It wasn't a bad pie by any means, it just wasn't the right combination of meat/gravy/mint sauce for my liking. But sure is better then a lot of other pies out there.

To me, lamb and mint sounded a bit exotic, so I was willing to try this flavour, and as it turned out, it's really quite nice. I enjoy lamb, as do most new zealanders, so the flavour appealed to me, but the mint sauce was something else. It had a rather unusual taste, it was like a syrup, with a leafy-taste and the rest is too hard to explain. The sauce added a foreign hint to the familiar and ever-delicious lamb fillings, and it was quite cool, it was like trying to focus on two things at once.

When I tried to detect the mint flavour, the lamb taste vanished, but when I tried to detect the lamb, I couldn't lock onto the lamb. This hybrid flavour is one that I received a good dose of pleasure out of, so I like the idea of having this flavour again. The combination of solid and liquid ingredients in the filling was also a nice combo, it's sort of like a Jekyll and Hyde scenario, two flavours and textures in one! As for who I would recommend this to, I would generally recommend it to everyone, but I would strongly suggest it to those who like out-of-the-ordinary, and slightly exotic, flavours.

The value for money side is also awesome, this pie is worth every cent the seller are asking for, as it is a good-tasting, high quality pie that is great for anything, picnics, on the road snacks, or even as the pie for a plate of peas, pie, and mashed potato! Well done Oxford!

Oxford Pies' lamb and mint pie is what I expected in a gourmet pie. It wasn't a variety you would find in a budget range of pies. Of all the Oxford Pies I have tried this is the one that was most like a homemade pie. I could imagine my grandmother taking the leftover roast lamb and mint sauce.

I was pleasantly surprised to see that there were big chunks of flaky lamb. I was expecting lamb mince probably because when I think of a lamb pie I think of a shepherds' pie. The meat was very tender and there was just the right amount of mint for me. There was the added bonus of being veggie free so my husband would have eaten it if it gave him a chance.

This is one of my favourite of all the Oxford Pies and I would be buying this one to heat at home for a lazy meal or from a pie warmer when I am out.

I was really hoping, when I looked into this pie, that I wasn't going to find some glowing green goop with little chunks of meat floating in it, like something from the mad scientist's lair in a B-grade horror movie... and thus I was very pleased to discover, after cooking it, a rich minty-flavoured sauce that didn't have day-glo aspirations. For me, food that has the look of a dino-sneeze isn't my idea of tasty or appealing snack food.

The lamb was my next concern - was it going to be isolated lumps in the mint sauce in the "would you like some meat bits with your mint sauce pie sir?", or was there going to be a generous amount of meat... I should have known, with this being an Oxford pie, and part of their premium range, it was going to be well packed with meat. I was also really impressed at how tender the lamb was, even after a round in the nukebox.

Something about this pie protected the meat and kept it tender and tasty even after nearly 6 minutes under the tender ministrations of the microwave, something I frankly have trouble understanding. Maybe it was the pastry that offered the meat some protection, because it too handled itself very well after micro-cooking, remaining soft and pliable yet tough enough to keep the pie insides and the outsides from overlapping.

Overall, this is a very nice pie which is sure to be a hit with a certain market, possibly more with the older crowd than the younger.

A nice tender piece of lamb can really make a meal a great one. Mint, well I prefer mine when it comes combined with a heck of a lot of sugar, so Lamb and Mint... Ehh... I wasn't too enthusiastic about it but since I got it to review I felt obliged to take at least half a dozen small bites.

First thing I noticed was that there is a lot of gravy in this pie which put me off it a little bit right from the start. Giving it a bite and it just didn't have that nice a texture and had me feeling like I just didn't want to touch it, but I soldiered on and had six bites out of the pie.

I didn't like the texture of the gravy at all, and really didn't want to eat more than one bite. The lamb was the best bit of the pie as it was so lovely and tender that was so easy to eat and I really liked that. However, I didn't like the overall taste and once I made it to my six bites I was happy to give up and pass it on to my husband.

I really didn't enjoy this pie at all, my husband did, but I'm not going to be eating it again any time soon.

I took this pie to work with me last week to enjoy for my lunch. Everyone in my office knows I'm reviewing pies so whenever I head to the lunchroom, they all follow to find out what I have today. The lamb and mint had everyone interested with all their opinions on what would make a good one.

Most agreed that the level of mint flavour to the gravy should be there with a tartness, but not too overpowering. I personally enjoy a good roast lamb with mint sauce or jelly. I also enjoy a lamb shank every now and then. Mint is just the perfect thing to go with it.

This pie cooked up nicely in the microwave. I cut it open to take a good look at the contents. The gravy was thick, with flecks of mint through it. The taste of the mint was there, but it wasn't as tart as I hoped. The lamb definitely had that lamb taste to it. The meat seemed tender, if a little fatty.

The pie pastry stayed together well and was nice and buttery. For a lamb and mint fan, this was a little disappointing just because of the strength of that mint flavour for me. But as far as an overall pie, it was good. I felt good and full afterwards and I would certainly still buy it again if it was on offer in a pie warmer.

Score: 9.3
Product reviews for listing 8370: Down to Earth Organic Chutney - Tamarind -  Produced by Down to Earth

Sweet and sour chutney is a delicious condiment with spring rolls, samosas, chips, crackers, samosas, pakoras, dahi vadas, bhelpuri and any kind of chat. This is also delicious as a dipping sauce for French fries and as a spread over crackers.

Just a dash of this stunning sweet and sour chutney blend spruces up almost all chaat recipes enhances the flavour by leaps and bounds making it a key factor for complete chaat experience. This zesty sweet and tangy dip recipe calls for the use of tamarind, jaggery and roasted cumin powder. Its taste is absolutely lip-smacking.