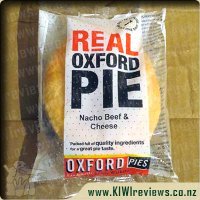 Arriba! Si Senor, theese pie has the meenced beef and the cheese with the tasty spiciness of the nachos and the beans... Perfect for after your siesta!

This isn't a flavour I would have naturally thought of if asked for types of Pies, but it sure is on my radar now. I'm glad Oxford pies bring out some "non standard" types of flavours. It is a premium pie so you expect good things, and you do get good things. First off you get great pastry that has just the right about of flake, and is the right amount of crispy all rolled into one and also happens to taste great, pastry is my weakness.

The filling in this pie is very nacho worthy, it has the right amount of spice for my liking and also had a bunch of beans in with the mince, a great combo and pulled off really well. I liked this pie and I think it will be come quite popular once people know it is out there, I know I will be having another one of these when I see them out and about next.

I love nachos and it is regularly on the menu in our household so the nacho beef and cheese pie from Oxford Pies really appealed to me. The flavour of the pie was just like nacho mince, so much so I would have dipped corn chips into the filling if I had some handy.

This pie had more kick to it than I expected but that was a great for me. For some people it might have been too spicy but I really enjoyed it. The cheese wasn't noticeable visually or taste. This was probably because the spice was the dominant flavour. I would have preferred more cheese especially as it was called a beef nacho and cheese pie. This is one pie that I would be willing to buy from a service station while travelling.

First off, it must be noted that this is a Premium Grade pie... it's not one of those soggy budget pies you grab from the local dairy with your left-over change when you want a quick grab'n'go snack. With that in mind, you have to compare this to other pies in it's price bracket... and it compares very favourably for me.

Pulling this out of the freezer, I decided that firing up the oven for a single pie was just stupid, but I also hate microwaved pies as it does rotten things to pasty... so I had to think of a way to get the best of both worlds. I couldn't... but I did have an idea how to get close...

Taking the pie out of the plastic bag, I wrapped it in some baking paper to create a sealed air pocket, and microwaved it on half power for 4 minutes - that was enough to thaw it and heat the air in the pouch. Leaving it to sit for 2 minutes, I then gave it a blast at full power for a further 60 seconds. This seems to have been the magic formula, because the pie was piping hot, but the pastry was not soggy or chewy.

Now, feeling a little cheeky, I peeled top off the pie, put a strip of tomato sauce on the underside, rolled it up and chomped it down... then dropped a little dollop of sour cream on the pie and tucked into it... with corn chips! Well, it is a nacho pie after all. This was a lot of fun, allowed me to eat the pie in small portions and most importantly, I didn't burn my mouth!

I loved it! The spicy taste was very 'nacho' and the red kidney beans just added to that whole nacho texture and taste. It was a little spicier than I was expecting, so it may be wise for those with "quiet" tastebuds to have an assistant on hand to take over if it gets too much, or try my trick with the sour cream as that was great for toning the zing down. But if, like me, you enjoy food with a bit of a bite, then this will be a pie you are likely to fall in love with.

Overall, given the choice between this pie and a $4.50 Georgie Pie... nostalgia be damned, gimme nachos, mi amigo!

I love to make pies at home and I love having nachos now and again for dinner, but I hadn't thought about combining the two together so I thought that this would be a great pie to try and thus it was the first I ate.

I found this to have a good overall look and texture and was looking forward to trying my first Nacho Beef and Cheese pie ever. It's a nice and soft pie inside, the meat is cut up very fine and so not much work is required to get this treat down into your stomach. There's a perfect blend of cheese and meat all creating a great flavour, that whilst not as nice as my home-made nachos, was nice enough to eat again.

Now, what I didn't like... I found it a little on the spicy side and as such was very glad that I had split the pie with my husband, otherwise I wouldn't have been able to finish the whole thing. My other downside to this pie was that even though the ingredients list on the back lists kidney beans there was only two in my half and three in my husbands half, being a nacho themed pie I had expected more.

This was a nice pie, it wouldn't be my first pick due to the spiciness of it, but a nice pie overall.

Since having the Butter Chicken pie, this one became my immediate favourite! I have always loved the nights where my Dad has cooked up Nachos for dinner, but most times, it's just mince at chips. Spice is, in my eyes, the key element of Nachos, so if you take that spice out, it is just mince and chips, but this pie has spice in it, and that makes it quite pleasant actually.

I didn't detect much of the cheese, but the mince was really flavourful. I noticed that it also had beans in it, though I'm not sure what type of beans they were, and the mince itself had a nice texture, it wasn't very starchy, and it didn't make me feel all heavy and gluggy afterwards. This is one pie that makes me wish I had a second one in my batch of review stuff, but I know that I'm out of luck on that front.

I still can't get over the fact of how much this pie tastes like proper nachos, and the added beans were just gorgeous. The large blend of ingredients created a bunch of contrasting flavours and textures that just made this pie taste delicious! The pastry was great, it had a good taste, but I can't say how well it would handle being eaten while in a car, because I ate this with a knife and fork. The price is good, it is around the same sort of average price as I would expect pies to be worth. Overall, very impressive pie, will be keeping an eye out for this flavour!

The flavour idea of this pie was exciting to me. One of our stable family meals is nachos with cheese and chips. So the idea of having that in a pie form was brilliant. I baked this in an oven. It took a while to bake and was definitely over the recommended 40 minutes in our gas oven before it was hot right through.

I found this easy to find on the tray with the other pies I cooked that evening because it was oval compared to the round ones I also had. It had a marker pastry shape on the top which would have been useful to identify the pie with other oval pies on a tray.

I gave this pie to my husband. He said that there was not a bean to be found, so they must have been blitzed into the beef mince mixture. He said it was spicy and seemed much spicier at first, but towards the end once his taste buds were use to it, it was milder. Cheese content was not noticed.

I went and got the same flavour at our local dairy to try it myself the other day. I found it to be a fairly mild Mexican flavour. Not as much punch as I expected, but still had some heat to it. It was a good level of spice for your average pie eater. The cheese didn't feature quite as highly as I would have expected either.

Quality selected peanuts, dry roasted and coated in only the finest sea salt for that full, natural flavour.