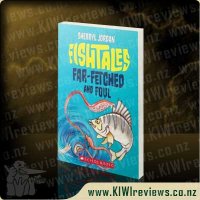 Disclosure StatementFULL DISCLOSURE: A number of units of this product have, at some time, been supplied to KIWIreviews by Scholastic (NZ) or their agents for the purposes of unbiased, independent reviews. No fee was accepted by KIWIreviews or the reviewers themselves - these are genuine, unpaid consumer reviews.
Available:
September 2013

Four fabulous fishing stories, from the funny to the fairly outrageous!

From a story about an eel that grows too big for the house, to one that teaches a cruel lad a lesson he'll never forget, to a story of a mystery monster with lashing tentacles and a fondness for snitching fishing rods, Sherryl Jordan's collection of fantastic fishy tales holds appeal across the board.

Lucky I got this book to review as it is not something that would normally appeal to me, my boys were excited when they heard me saying "fish stories" but soon lost interest so I suspect they were a bit young but I will be keeping this to give them to read when they are a bit older.

I liked that the stories were short and I didn't get time to be bored but some were really far fetched and stretched the imagination rather a bit. I liked that a horrible boy learned a lesson, if only it were that easy in real life.

The characters were believable and some were rather funny, it is good to see a father being involved with the kids by taking them fishing.

I would recommend this book to anyone with a child with an overactive imagination or one who just loves to read. Although I'm not going to be reading this again I'm keeping as I know my boys will love it, appeals to them on so many levels.

This is a fab book of four fish tales from my favourite writer of kid's novels, Sherryl Jordan. I recently was lucky enough to get a re-introduction to Jordan's work. I owned a number of her books as a teen. This book is a set of short stories on a similar theme.

What I liked about this, is that each story feels different. There's a difference in the tones, inflictions and general feel of the narration, characters, etc. That was really cool, because they were all good stories. I honestly feel like they individually could have stood alone. But together, they just make an awesome collection.

I was a little worried about sharing these with Miss 6. I sat her down and explained that it would be scary when it was the first book she picked for her story time. "I love scary stories!" she said. She was even more excited to know the fishy book was going to be scary and spooky. So our fates were sealed.

Thankfully, the tales while they do have some tense moments, are not too scary. Any fears I was able to wipe away by talking about fiction. The first tale was about a giant eel, which at first was a bit scary but it eventually ended with some comic relief. The second story was kind of a moral tale, though there was one point when I really thought the author was going to kill the main character. The first was my daughter's favourite because the main character liked collecting pets in the wild and that's like my daughter. The second was my favourite, just because it was set as a historic tale.

Both of us were on the edge of our seats with the third and fourth tales. The third in particular was quite surreal, but again we really worried about this character in the situation he was in. All the descriptions really just added to our tension. I think this would be a great book for a tween into a bit of scary stuff. The stories are about 50 pages each and took us a while to read, making bedtime later this week. Miss 6 was not complaining at all.

Before long the jacker himself starts to ... more...