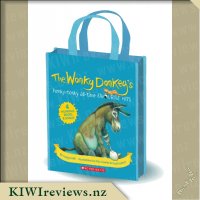 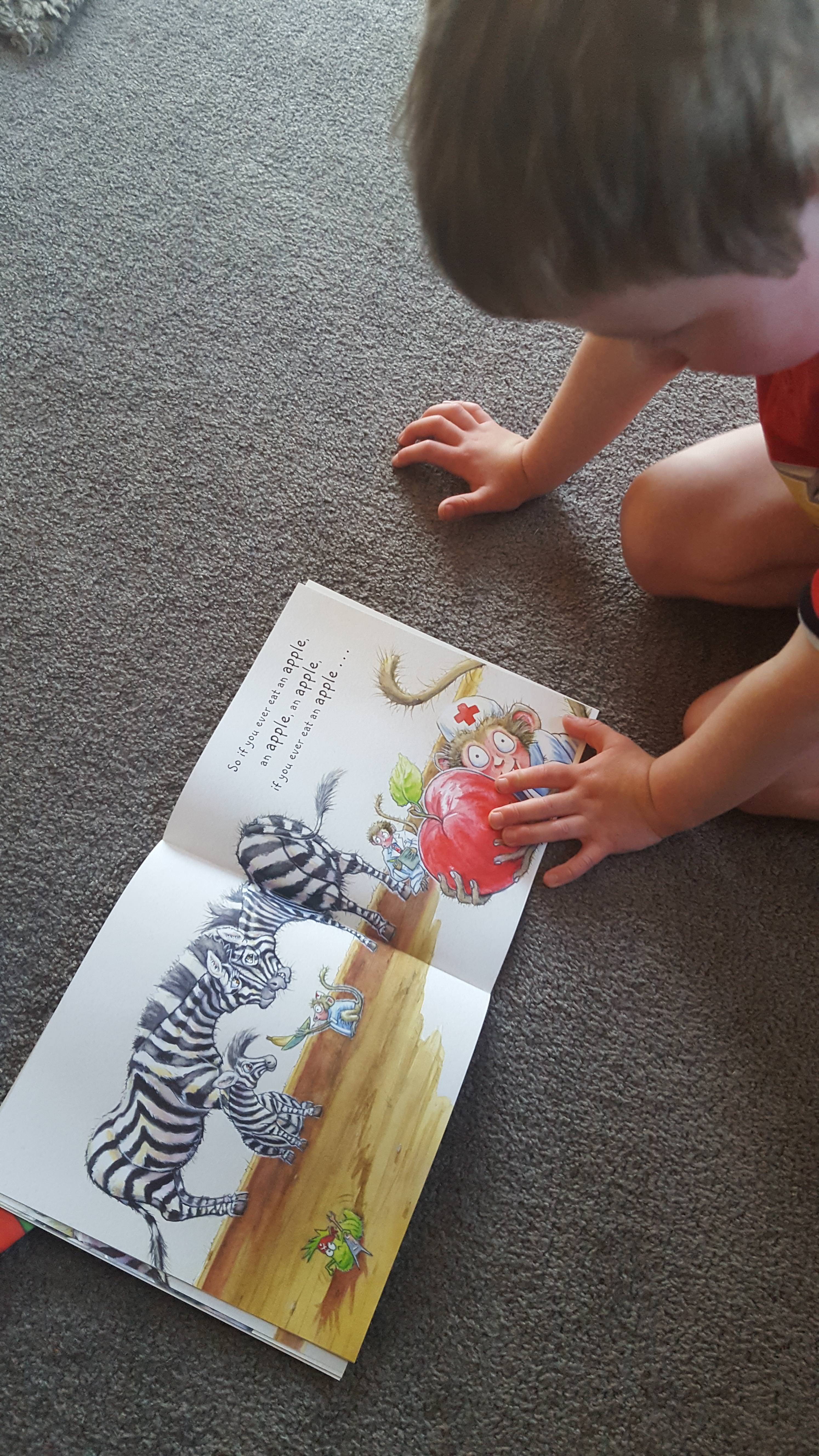 Opening my review parcel and discovering this set of four books inside I knew just who I wanted to share these with. My sister has twin 3 year old boys and they absolutely love books. As I was booked in to baby sit one night I thought it would be the best opportunity to take them with me, so we could read them before bed and enjoy them together.

The boys were familiar with the Wonky Donkey book - funnily enough I had bought it for them as part of a baby shower gift where the guests were invited to bring along a book that was popular at the time and leave a message inside for the children. They still enjoyed it and helped to sing along with me. Having the CD there is a great option, although on this occasion we decided just to read it.

The next request was My Daddy Ate An Apple. This book I haven't heard so was keen to hear it. They didn't want the CD on, so I read the book instead. Of course I wasn't able to sing the song as I hadn't heard it but this didn't bother them, they were interested in the pictures and just what was going on. Once I got home I listened to it and discovered it was a familiar tune and one that got stuck in my head! Definitely was a great match for this story.

Next up was Willbee the Bumble Bee. This is one of my favourite Craig Smith books, so I was interested to see what they would think. Once again they chose to listen without the CD - I am starting to get that they prefer someone reading them books than listening to a CD! The pictures in this book are what caught the attention of my nephews. They were pointing out everything they could see, and asking lots of questions. They couldn't quite understand how a bee could loose it's stripes! We got to the end of the book and they were happy that Willbee had his jersey back.

Last up was Square Eyes. This book is an entertaining one along with carrying a message. It certainly is important not to watch the TV all the time and to get up and be active. I always enjoy a book that has a great message, especially when sharing it with the younger generation.

All in all this is a great wee set of books, and would make a perfect gift for a child too. I like that they can all be stored in the bag so that they can be easily found together, which will help with keeping the CD with all four books. Thanks Scholastic and KIWIreviews. 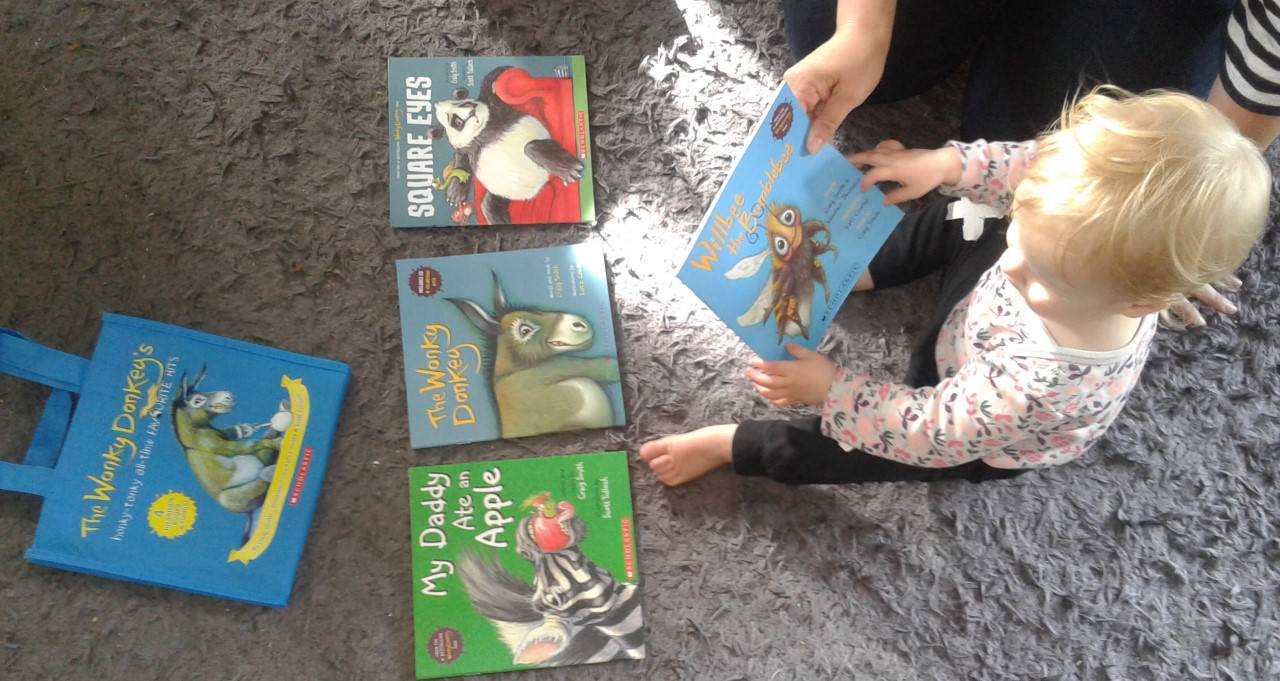 Miss One's eyes lit up when she saw the little blue bag and realised the contents were for her. She is getting used to handling books now and is careful to hold them upright, turning the pages slowly so that they don't tear. It is wonderful watching a young child's motor skills develop in this way. She responds to colour, patting the pictures on each page as the text is read to her, and although she may not yet understand much of the content, she enjoys being read to and adds the odd "comment" of her own every now and then.

This bag has a CD as well as four separate story-books, a big plus for little ones because they can join in with the fun long before they start to use proper words. We played each song after we had first looked at the pictures in the story but before we had actually read the text. First we listened to The Wonky Donkey. The lyrics mainly followed the printed words, but Miss One was particularly fascinated by the sound effects - there was lots of hee-hawing at the start and this made us all giggle. We tried to copy the sounds and Miss One joined in!

The second song accompanied Willbee the Bumblebee. The illustrations were delightful, and the grown-ups all laughed at poor Willbee's bare bum. Miss One could not quite work out why we were laughing, but she joined in anyway! There was lots of buzzing in this song, much to her delight, and we all encouraged her to buzz along. The song lyrics followed the story closely this time so she will be able to follow the printed words herself in a couple of years' time when she is able to sound them out.

My Daddy Ate An Apple was the third of the books. Again, the song was faithful to the text, but it was probably the least accessible for Miss One. The drawings are hilarious, particularly the elephant doing double duty as an ambulance by transporting My Daddy to the hospital so the worm can be moved along, but they had less appeal for Miss One than those in the first book. However, I think the issue may be that the pictures are more detailed and the colours more subtle, so I can see her growing into this text as she gets older. In fact, this is a strength, as the set will last longer!

Square Eyes was a fun book with an important message about getting active instead of watching TV all the time. The recording has a catchy tune and follows the text quite closely, but again the pictures are more sophisticated than those in the first two books. However, the music has a good strong beat and real kid appeal, so Miss One bounced along with the rest of us.

The value of this set is that each of the books and songs is pitched to a different age level. This means that Miss One will continue to enjoy them for some time, and hopefully by the time she is at school she will be able to read the texts by herself. With a little help, of course!

Alexander knew it was going to be a terrible day when he woke up with gum in his hair.

His best friend deserted him. There was no dessert in his lunch bag. And, on top of all that, there were lima beans for dinner and kissing on TV!

This handsome new edition of Judith Viorst's classic picture book is sure to charm readers of all ages.