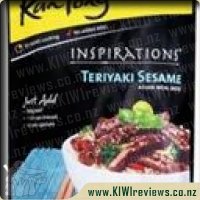 A quick and easy sauce for almost any meal.

When I grabbed this off the shelf it was because it worked out to be the cheaper option, and where we can we go for the least expensive item that can feed our family. This is a sauce that says it covers a meal that will feed four people but I have found, on the right night, that I can stretch that out to almost seven people by simply adding some soy sauce and worchester sauce to the meal.

If I cook just this sauce with a 'meat' or meat then I find it gives a nice caramelization to the food and goes really good on top of plain rice that has been drizzled with soy sauce. In other dished I can create a stir fry with veges and noodles or veges and then popped on top of rice, for a more saucier meal. If I'm feeling really adventurous and I just don't have enough sauce to a meal then I add a packet of this to my cooking dinner and have had some really yummy results from it (I've yet to have a bad result, so that says something good about this sauce).

This is a yummy sauce and well priced, we're still buying it a year on.

My children love stir-fry noodles at the moment. Add to that, stir-fry is quick and easy and filling, and its been one of those staple meals every week lately. I would say at least twice a week to be honest. I have been looking around for different sauce flavours and happily trying brands I would not normally try. This Kan Tong sauce pouch caught my eye on the weekend.

Kan Tong use to come just in big jars of sauce. These were always too much sauce for my family. This pouch is smaller and designed to serve approximately 2 people. This works out great for us, because often the sauce is very flavourful and a little goes a long way. Our kids have different tastes. So our toddler really doesn't mind strong flavours when it comes to sauces, but the 6 year old minds a lot and finds sauce to make things too slimy to eat. Hence I'm always looking for a good sauce, in the right serving size for my family of four.

I love the black pack with the serving suggestion photo on the front. I didn't even think about getting beef for this. Instead I had diced chicken. I didn't realise this would be better with a red meat until the chicken was defrosted anyway. I cooked the chicken, and then the vegetables. Next I added some Singapore noodles and finally the sauce. The smell was really nutty from the sesame seeds.

I served this to the family. My eldest didn't touch too much of the meal. She ate some of her noodles, some chicken and then asked for fruit for dessert. My toddler ate everything she was given and asked for more. She regularly eats twice as much as her sister. My husband and I really enjoyed the flavour of the Teriyaki sauce. I would try other sauces in this range. Teriyaki is a flavour that is safe for us, but I would be willing to branch out given the performance of this product.

The Indian cuisine is as diverse as its culture, language, regions and its climate. Every major region of India brings its own unique dishes and subtle variations to popular dishes. Aromatic spices are the essence of Indian cuisine. Use of particular spices such as Coriander, Cumin, Fenugreek, Asafoetida etc., give Indian food its distinct flavour. The cooking skill lies in the subtle blending of the variety of spices to enhance the basic ... more...