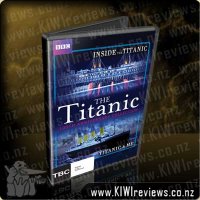 Disclosure StatementFULL DISCLOSURE: A number of units of this product have, at some time, been supplied to KIWIreviews by Roadshow (NZ) Ltd or their agents for the purposes of unbiased, independent reviews. No fee was accepted by KIWIreviews or the reviewers themselves - these are genuine, unpaid consumer reviews.
Available:
April 2012

Inside The Titanic
To commemorate the 100th anniversary of the sinking of the Titanic comes this dramatized documentary telling the story from the point of view of the killer: the water.

This is the story of a massacre. When the Titanic sank on its maiden voyage, 1,517 passengers and crew died. Everybody on board was fooled by the water, a devious and unstoppable killer. Sometimes it crept unseen, at other times it roared. One minute it was hidden, the next it was everywhere. By following the water, this compelling film reveals exactly how the famous ocean liner sank.

Titanic And Me
A unique account of one of the most famous disasters in history, bringing together for the first time - through their descendants - the individual stories of those who constructed or sailed on the Titanic.

The sinking of the Titanic in 1912 affected thousands of families and this fascinating series explores how the impact of the Titanic disaster is still felt a century later. Every person connected to the Titanic had a story, from the builders to the passengers, the survivors to the victims, those who came to the rescue, and those who ignored the S.O.S. These tales of loss and love, triumph and tragedy, are a part of the Titanic legacy that continues to live on in their descendants and are explored here.

This was a great DVD, and gave some great insight and a new perspective on the tragic day the Titanic sank. Of course, it's all full of "best guesses" since no-one who knows exactly what happened survived the event - all the survivors were much farther 'up-ship' than the poor sods on the front lines who felt the chill sting of the water coming in like a liquid laser. However, taking into account all the evidence gathered from the wreck itself, the survivors' own accounts, and some very skilled engineering estimates that combined the two sources, along with the original blueprints and construction records - this is probably as close as we are ever going to get to knowing what exactly sank the unsinkable ship.

This DVD is a double-whammy - not only do we get a stunning documentary-style show packed with facts, 3d rendered graphics, and historical information about the people and event itself, but we also get a second show which concentrates more on the aftermath - the effect not only on the families of the lost, but on their friends and neighbours, those who shared a town with the lost, and those around the world who were affected in some small way by the most famous maritime tragedy in our history to date. This is a DVD that takes you back as best we can, and shows you not only the emotional explosion, but also the lasting fall-out too. Frankly, this is one DVD that really brings it home to you what a devastating thing it was, and scales it to that era.

Overall, I was very impressed, and emotionally impacted by this DVD. It had to watch it four times before I could really get it all to settle in my head enough to write this review. Had I attempted to do this after the first sitting, I think it would have been half a page of just "Oh my god, those poor people... damn... oh my god... ummm, shocked..." - None the less, that is indeed how I still feel now, only I can work around the horror and write this. A DVD that is a must-have for any who really want to know what it would be like. And considering the number of "close calls" we still see in maritime disasters today... one any ocean-going tourist should be aware of. You could just save your own life by remembering NOT to make the same mistakes!

Artful dodger Yossarian is a bombardier in the U.S. Air Force during World War II who is upset that thousands of people who he has never met are trying to kill him. His biggest problem isn't the enemy, though, it's his own army that keeps increasing the number of missions soldiers must fly in order to complete their service. And if Yossarian tries to make an attempt to avoid his assignments, he will be in violation of catch-22, a ... more...