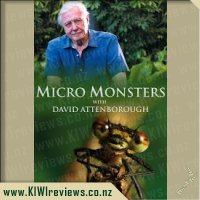 Disclosure StatementFULL DISCLOSURE: A number of units of this product have, at some time, been supplied to KIWIreviews by the company for the purposes of unbiased, independent reviews. No fee was accepted by KIWIreviews or the reviewers themselves - these are genuine, unpaid consumer reviews.
Available:
February 2015

Its a small world after all. In this revolutionary new series, David Attenborough reveals the marvellous adaptability of the most successful group of animals on the planet. Using pioneering macroscopic filmmaking techniques, he explores in unparalleled detail the intricate, sophisticated behaviours of these fascinating creatures and the complexity of the environments they build and inhabit, in a world normally hidden from the human eye.

From armies of killer ants to spiders weaving silken trap doors, ferocious scorpions with paralysing stings, beetles shooting boiling chemicals at their enemies, bees communicating with a waggle dance and assassin bugs that clothe themselves in their victims corpses; David Attenborough will as never before take viewers deep into the macroscopic world of bugs.

Orange is the New Black: Season One
Rating: 9.6

I am a huge fan of David Attenborough, and love watching any tv series he is involved in, so was delighted when I was picked to review his TV series Micro Monsters, not just because David is awesome but also because bugs and insects are really cool and I love learning new stuff, especially stuff I can share with my kids and my daughter is obsessed with animals and insects and nature :)

This series is so awesome. The information jam-packed into this series is amazing, covering; hunting for food and the attacks and conflict that happens in the process, courtship (mating, dating, and so forth), and the family units and colonies that exist beneath our feet.Through this dvd you learn things about spiders, scorpian, butterflys, bumblebees, cockroaches and more while also learning about some insects you didn't know existed, such as bombardier beetles, antlions, and cockroach wasps.

Because insects are so tiny in most cases so everything on the dvd is magnified. I really loved that it was magnified so much you could really see just what these little micro monsters look like. They really are amazing little creatures. The magnification also showed the earths floor in great detail which was really quite amazing.

My children really enjoyed this series. We all learned something new and really interesting and we all laughed during episode 2 when the male mantis attempted to mate with the female and the female cut off his head, which is what they do. A really interesting dvd with so much amazing detail, information and beauty. David Attenborough provides you with a whole new appreciation and view of thd world that we rarely give a second thought. These little animals are the most amazing, intelligent, and creative creatures ever. I was just unaware of how intelligent these insects are :)

Revisit the Cybermen's return in this fantastic collecion featuring 4 thrilling episodes, as the Doctor and companions battle agains the evil silver giants.