ProdID: 1349 - In Search of the Trojan War
Type of Show: Documentary 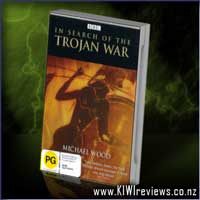 Disclosure StatementFULL DISCLOSURE: A number of units of this product have, at some time, been supplied to KIWIreviews by the company for the purposes of unbiased, independent reviews. No fee was accepted by KIWIreviews or the reviewers themselves - these are genuine, unpaid consumer reviews.
Available:
March 2007

In Search of the Trojan War product reviews

Tales of Troy and its heroes - Achilles and Hector, Paris and the legendary beauty Helen - have fired the human imagination for 3,000 years. With In Search of the Trojan War, charismatic historian Michael Wood vividly brings to life the legend and lore of the Heroic Age in an archaeological adventure that sifts through the myths and speculation to provide a fresh view of the riches and the reality of ancient Troy.

Over six hour-long episodes this gripping series shows why the legend of Troy forms the bedrock of Western culture and why it's past is a paradigm of human history. Wood's meticulous scholarly sleuthing yields fascinating evidence about the continuity and development of human civilization in the Aegean and Asia Minor. With its 50 feet of debris resulting from constant rebuilding, human destruction, earthquake, and abandonment, the mound of Troy contains the beginnings and ends of new races and civilizations. The DVD includes a new 25-minute interview with Wood, who looks back affectionately on the making of the series and a photo gallery.

I have always enjoyed tales from the ancient world... the stories of Achilles, Jason and the Argonauts, the tales of the old Greek Gods, I grew up on stories and early movies that transported my imagination back in time to an age of heros and gods. This was a great walk back through time to those days, a journey of discovery peeling away layers of dirt, and myth, to find the preserved nuggets of history at their hearts. With a lot of side details thrown in as well, this is more than full. I was really impressed at the huge detail put into this documentary, both on the main track of the story of Troy, but also into the skills of the people who carried the stories down through the years. Some of it was quite tiresome and overly-detailed, but for those few brief moments the trip is well worth it. Nearly 6 hours, more than enough to while away a rainy day at home alone, settled back in the comfy chair by the fireplace with a good bit of light reading.