I Survived: The Sinking of the Titanic, 1912 review 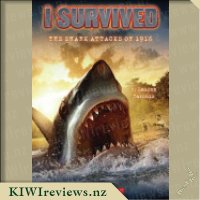 I Survived: The Shark Attacks of 1916 product reviews

It's the summer of 1916, and ten-year-old Chet Roscow is just as captivated as everyone else along the Jersey shore by the local news: a Great White shark has been attacking and killing people up and down the Atlantic coast, not far from Chet's hometown of Springfield, New Jersey.

Then one day, swimming with his friends, Chet sees something in the water...

Lauren Tarshis brings history's most exciting and terrifying events to life in this new fictional series. Readers will be transported by stories of amazing kids and how they survived!

Tags:
1916   based on actual events   i survived series   shark attack

A shark attacking a human? Impossible! Sharks are tame creatures, most people believed, easily scared, with jaws too weak to do any real damage to a human. In 1891 Hermannn Oelrichs offered a $500 reward to anyone that could prove that a person could be attacked by one of these gentle giants. Then in 1916 the unthinkable happened. Over twelve days during a hot scorching July four people were killed in a shark attacks and only one boy lived to tell the tale. The events where blamed on a Great White but considering three of the attacks happened up river I am pretty sure it would of been a Bull Shark.

This book is based on true events but the story is completely fabricated. It is still a very fast paced, enjoyable story and I found I could not put it down. Unfortunately, not completely based on the shark attacks but more on kid relationships and making friends. With the occasional news article thrown in to mix the story up. The book starts off with the actual attack occurring then skips back nine days earlier to set the tone of the story.

I enjoyed the writing style and found I could not wait to find out what would happen next. More so because I love sharks and I was gagging for the attack to take place. It is well written and am interested in reading more of the 'I survived' series.

I liked that once the actual story at finished the 'Real Story was revealed with the Actual Real Details.' It also gives basic facts about sharks. For instance: shark attacks are so rare that in 2008 there were only 118 attacks reported world wide and of those attacks only four people lost their lives. Out of those attacks 59 were "unprovoked" meaning that the shark attacked someone who was not doing anything to deliberately attract or touch it. In contrast, an average of 125,000 people die of snakebites each year which completely freaks me out!

I found the story very basic and easy to follow, a great read for any preteen wanting to know about the real world.