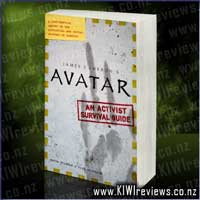 Field notes and other data from the Resource Development Administration's xenobiological research and scientific labs have been compiled as a guide to the many unique aspects of the moon Pandora. This report details Pandora's alien ecosystem; its mining mother lode and topography; its flora and fauna, and the culture, language and physiology of the native population, the aggressive hunter-gatherer race called the Na'vi.

Exceedingly profitable, Pandora provides challenges to successful exploration and extraction. From it's gravity-defying Hallalujah Mountains to it's gargantuan natural Stone Arches, and from the small but venomous Hellfire Wasp to the gigantic carnivorous Thanator, Pandora poses continual dangers to RDA aerial- and ground-forces daily.

Also included in this resource are highly confidential and detailed descriptions of RDA technology and weapon systems deployed to suppress the indigenous hostiles and defend employees against the dangerous Pandoran environment.

This book is stunning in the depth of detail it gives!! Done up to look somewhat like the slightly tattered journal of a scientist/researcher, "Avatar - An Activist Survival Guide" is crammed full with animals, plants, machines, history, culture, language.. heck, basically anything and everything one could possibly want to know about the world of Pandora and all the fascinating life on it (right down to the Na'vi's counting system and their mating practices!!). In some ways, it reminded me of the Field Guide from Spiderwick Chronicles!
I could easily lose myself in this book for several hours, just trying to take it all in, even though most of the creatures and plants in there are also found in "Avatar - The Movie Scrapbook"... this book definitely has far more detail though, plus a much larger section on the Humans' technology and their influence on Pandora.
Although filled with a lot of information and heaps of images, I did think the price maybe a wee bit high for a book like this, although with other books on the market of a similar sort (however, this is definitely the most detailed fantasy-styled "field guide" I have seen so far) being similarly (or even higher) priced, maybe it's not too high after all.

If you want to learn more about the world of Pandora, or just find a bit of inspiration for your own stories, art, craft etc, then this is a book that needs to be on your shelf... if not permanently at your side to drool over. :-P

By far the most comprehensive 'back story' behind a movie I have ever encountered, this guide is laid out in a very 'encyclopedia in progress' style. Each page not only carries 'official' information, but also notes and jotted comments as though it was indeed someone's handbook and they have added their own data to the pool.

The illustrations are incredible, ranging from quick thumbnail sketches to photo-realistic rendered art that can only be the same ones used in the movie. Some of the more 'advanced' images were so good, I had trouble deciding if they were doctored real scenes, or fully rendered... the level of technology behind this movie, and the world of Pandora, is beyond belief!

There is a wealth of information here, including plants and animals, geology, physics, weaponry, the native Na'vi people... you name it. If it got any more detailed I would serious wonder if it wasn't real, and the movie and toys etc were just hyped smokescreen. There's almost *too much* detail for it to be a fabrication.

Overall, this is certainly a great companion book if you adored the movie, as so many people did and do... but as well as that, it is a great resource and inspiration for authors of fantasy and fiction. If you can create a world to this level of detail, then the stories you write in that world will remain true to themselves, and thus true to the reader. For those keen to get into digital art or design, it is an indication of the leading edge, and thus a good level to aspire to. For so many reasons, this is an incredible book well worth looking at, then buying if it captures you. My only gripe is that without any form of story or plot, it can be a little 'dry' for this pricetag.

A thrilling tale of adventure, romance, and one girl's unyielding courage through the darkest of nightmares.

Epidemics, floods, droughts - for sixteen-year-old Lucy, the end of the world came and went, taking 99% of the population with it. As the weather continues to rage out of control, and Sweepers clean the streets of plague victims, Lucy survives alone in the wilds of Central Park. But when she's rescued from a pack of hunting ... more...