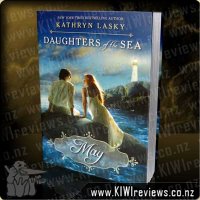 Daughters of the Sea - 2 - May product reviews

At first, swimming provides the freedom May has always craved. But then she meet Hugh, a visiting astronomer who awakens sensations she's never experienced, either on land or in the ocean. May knows that a college student would never fall for a lighthouse-keeper's daughter, but Hugh soon begins to spend more time gazing at May than the stars... and the expression of wonder on his face doesn't change.

What had been an easy choice becomes agonising when May has to ask an impossible question: Is the thrill of the sea worth turning away from love on land?

'May' is the second book in Daughters of the Sea, a series about mermaid sisters who all washed up on different parts of the American coast and were raised to think they were human - until their yearning for the ocean causes them to discover the truth.

Having not read the first book, I was taking 'May' entirely on its own merits, of which it has many. I enjoyed the central character's voice. She was young but had a certain determination and hardness that came from being the Lighthouse Keeper's daughter. I felt sorry for her because of the way she was treated by her 'mother' who was eternally sick and bullied May horribly. I also enjoyed the potential of the romantic plot between May and Hugh, with the dastardly Rudd in the background.

Unfortunately, the danger was never that dangerous and the connection between May and Hugh didn't have a chance to shine. I suspect this is because the character, Hannah, from the first book had to be introduced at some point and then the story shifted to more of a focus on her presence and her significance to May.

Because this book is part of a series, it also didn't have much in the way of a satisfying ending. Having said that, I would be interested to see where the story goes and whether the sisters are able to finally reunite.

I imagine this set, much like the Owls of Ga'hoole, is aimed squarely at children. I would buy Daughters of the Sea for girls around eight to twelve.

With the current obsession with vampires and werewolves, this series offers something pleasantly different.

Set at the end of the 19th Century, the Daughters of the Sea series chronicles the stories of 3 mer-babies separated and lost in a storm. They all go on to lead different lives eventually trying to find their way back together and back home.

This book, the story of May, is the second in the series but having read it out of order I didn't feel like I had missed anything by not reading the first book. It is obviously aimed at a young pre-teen to teen reading group but honestly I still enjoyed it, it was nice light reading. It's an imaginative story filled with different personalities, some you love and some you can't stand. I found it also leaves you interested in reading more. Mermaids have also long been a bit of favourite of mine so that further added to my enjoyment of the story.

I liked that it doesn't follow the usual formula that I had noticed in some series of books, instead creating a really nice blend of original characters. Given it's a fantasy story I liked that it was written in a way that makes you think it could be possible. It was easy to lose myself in this book and I actually put it away in just over a morning. Whoops.

It may be aimed at a younger market but I for one will be looking to get my hands on the others and see how the stories of these young mermaids develops.

It was all so good. Sasha and Rose. Best friends in a band, singing together. Right up to the finals of Killer Act when the judges tell them one of them must go.
Suddenly their friendship is put to the ultimate test. On TV in front of millions...
Two girls. One huge mistake. Can they ever forgive each other?