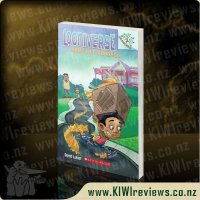 Ed has to sell chocolate bars to raise money for his soccer team, but the bars have all melted. He must find another way to raise money--and fast! Ed uses his newfound ability to make strange things happen, but his plans go awry and Ed ends up needing money for the soccer team, his friend Mouse, AND two new windows! With surreal and funny antics throughout, the second book in this heavily illustrated early chapter book series is sure to keep kids laughing

Who wouldn't want to live in Looniverse? Poor Ed who suddenly has to watch what he says or really strange things start to happen. If you have an active imagination then you should love this book, the illustrations are great and a few even made me smile.

Ed is back and this time he wants to be on the soccer team but he has to sell chocolate to raise enough money. What could possibly go wrong? Read this hilarious story to find out. Ed is learning what it is like to have a magic coin.

I really liked that the story was easy to read and with a sense of humour it will be every child's dream world but dreams do come at a cost. I managed to read this book in about half an hour but then I do read rather fast, I even had time to stop and see the drawings and appreciate the work that went into putting the book together.

I'm hoping that there are more Looniverse stories as every child needs to be a bit looney sometimes.

This is the second book in the Looniverse series and we continue to follow the adventures of Ed. Ed decides that he wants to be on the school soccer team and chooses to sell chocolates, he runs into trouble though when he asks his friend to run it home as fast as he can and he runs so fast that all the chocolate melts.

In this book Ed is still new to the coin and learning how to use it and control it. He also has to learn how to solve his problems that come about due to his chocolate melting followed by needing to fix two broken windows and his sisters broken toy. Ed keeps on making mistakes as he tries to figure out how to control the strangeness but manages to find a way to put everything right by the end of the book.

The book is nice and easy to follow and it's easy enough to take small breaks from it before coming back to it, which is good as I would come back to it and my son would know where we were at and could basically remember what had happened prior to our break from the book.

A good book to continue the series, I can see from the back cover that there are at least two more coming out, the next involving dinosaurs so will be keeping an eye out for more Looniverse antics.

ACCUSATION is Mary Fielding's account of a nightmare that begins one ordinary evening with a knock at her front door. Minutes later three police officers lead away her husband Steve. Later that night he is charged on two counts of indecency. What is his wife and mother of his two daughters to believe? And which is worse: that her husband is guilty as charged, or that an innocent man is subjected to such on-going anguish?