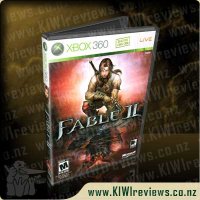 In this game by Lionhead Studios you take on the role of a young urchin in the world of Albion. Your fate is your own, this game offers the player a flexibility uncommon in role-playing games of its time.

Choice is at the core of this game and is integral to your progression. Every choice has a consequence, good or bad it all depends on how you want to play the game. That is one of my favourite things about Fable 2 and the Fable series as a whole. Whether I choose to do the morally correct thing or not, there is a visceral change in the character's appearance and in the way the world of Albion interacts with him/her.

The world of Fable 2 is at your fingertips, not only can you make choices that reflect the character you want but any property is up for the taking, provided that you have the requisite funds. Implicit in this game is the ability to become whoever you want to be, there are real estate properties scattered about the land, from the dingy hut of a Bandit you've slain to the grandest of abodes, Fairfax castle.

You want weapons? You want magic? Well, this game has both. Fable 2, like its predecessor, comes with an armoury of weapons you can customize to have different abilities. You can solve the Demon Doors' riddles and be rewarded with rare armour or special weapons. You can sacrifice a life for a bow used only by the vilest of villains or you can try your piety and strength for a holy blade with attack stats off the charts.

The Blood of Heroes runs through your veins and so too does the power to wield awesome magical powers. You can throw fireballs, summon the powers of the storm or call down lightning on your foes, this game goes a long way to make the player feel powerful and it certainly achieves that.

This is a game for those people who want freedom to do what they want, however they want in a fantasy world. Fable 2 is the Grand Theft Auto of Role-Playing Games without all of the gratuitous gore and explicit adult content. Fable 2 is a humourous experience with quirky characters, charming landscapes, an immersive plot and an experience worth having.

It's always nice to put this game down when you've done all you think you can do, then come back later to find that you haven't touched the surface. This game is among my all time favourites, if you're in the mood for an adventure and a bit of a giggle then this is the game for you.

This is a fun game. You have the ultimate choice, are you going to be good, bad or neutral. As you play through the game you are constantly given choices and each one can have a physical effect on your characters appearance.

One of my husbands favourite aspects of the game is that you can buy properties throughout Albion, upgrade them with nicer furniture etc, and rent them out. You can stop playing, and when you come back to the game, it has still been collecting rent for you, in real time, so you still get enough funds from your houses without having to have the game on continuously.

The game as a whole was lots of fun. When you start you can be male or female, and due to the choices you can make you can play one game through being as good as you possible can, the next as evil as you want and then yet again, trying to be a bit of a both, so there is a good amount of re-playability there, the only downside is that there is a very set path of where the story is leading to.

Overall a good game, and if you have played any others in this series then you must play this one too.

In 2047, Tiberium has blanketed the Earth, which is now divided into zones based on the level of Tiberium infestation. The infamous Kane has returned to lead the Brotherhood of Nod in a massive global assault on the Global Defence Initiative and the few remaining Blue zones left on the planet. Only you can stop him. The fate of humanity - and the planet - is in your hands...