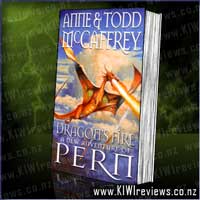 Disclosure StatementFULL DISCLOSURE: A number of units of this product have, at some time, been supplied to KIWIreviews by Penguin Random House or their agents for the purposes of unbiased, independent reviews. No fee was accepted by KIWIreviews or the reviewers themselves - these are genuine, unpaid consumer reviews.
Available:
December 2007

The Shunned are criminals condemned to a life of wandering and hardship. Their children share their punishment. Tenim is a child of the Shunned and has been stealing coal from Camp Natalon, aided by a dishonest miner, Tarik.

Tenim soon realises he can make more money by stealing firestone, the volitile mineral that enables the dragons of Pern to burn Thread out of the sky. Tenim doesn't care what he has to do, or who he has to kill, in order to corner the market.

When the last known firestone mine explodes in flames, a desperate race begins to find a new deposit of the deadly, but essential, mineral, for without it there can be no defence against Thread.

But Tenim has a murderous plan to turn the tragedy to his own advantage, and only the tracker Pellar, Halla - another child of the Shunned - and Tarik's son Cristov - determined to make amends for his father's greed - can stop him and ensure that there will be a future for all of Pern.

I grew up reading Anne's early works, her 'Crystal Line' series (which has recently been re-released), her 'Talents' sagas (made up of about 3 series of books) and of course her 'Ship who...' series... but after a few attempts at her early 'Pern' books I wasn't really hooked... and so gave up on these ones.

However, after seeing that the reins of Pern were being handed to her son, Todd, and reading his first solo book 'Dragonsblood', I found myself getting rather drawn into the Pern stories... so was happy to give this one a shot. I am glad I did. I found the characters quite easy to empathise with, and their plight wasn't beyond belief... social ostracism, revenge, theft for a noble cause (to feed starving children... I mean who wouldn't fall to that as a last resort!), it's all stuff that happens in today's world... it's part of human nature... so if you discount the amazing methods of travel (by transdimensional dragonride) the story could easily be a tale of survival by any of today's lower-class or third-world peoples.

I found the plot a little rushed in places, however what it lost in detail, it made up for by keeping the book interesting, and illustrating how events can sometime rush together and crowd in on us at times, and it was great to see that no matter how helish things got, the key players were always able to bring cool, level heads to the task... a lesson we could all well afford to learn.

Overall, another excellent book for the collection, and with a suitably low level of violence that it would make good reading for kids too... but maybe not bedtime reading for the little ones... there is a bit of nightmare-food in such stories, especially when you consider the end results of a fully-staffed underground mine exploding and collapsing. I especially enjoyed the positive note at the end of this story, which promises some great changes to the world of Pern as we will read about it in future tales!