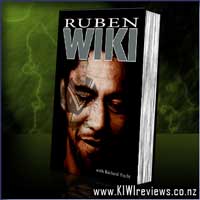 Disclosure StatementFULL DISCLOSURE: A number of units of this product have, at some time, been supplied to KIWIreviews by Hachette or their agents for the purposes of unbiased, independent reviews. No fee was accepted by KIWIreviews or the reviewers themselves - these are genuine, unpaid consumer reviews.
Available:
November 2006

Ruben Wiki, a tough non-nonsence sort of player who leaves nothing on the sidelines, he is the heart and soul of the line up.

He is the talismanic leader of the Kiwis rugby league team - a 12 season veteran of the NRL who, in 2005, led New Zealand to a historic series victory over Australia and guided his side to Tri-Nations glory.

Wiki's story is one of raw courage and genuine pride. South Auckland born and educated, he is immensely proud of his roots and Samoan heritage. In his book, Wiki talks of his pride in the New Zealand jersey and how, as captain of the national side, he was able to imbue that same pride and sense of belief into his team-mates.
He talks about his 11 seasons with the Canberra Raiders, including the premiership win in 1994, and his time with the Junior Kiwis when he and former All Blacks captain Tana Umaga wreaked havok amongst their Aussie counterparts.

You'll also find out why he decided to see out his career with the Warriors after turning his back on the club in a storm of controversy in the mid-90s.

Sitting down to read Ruben Wiki's new book was my plus of the week. It's told boldly with plenty of humour and also very touching. Wiki takes us through his early childhood - from the talented young Polynesian boy who grew up on the 'wrong side of the tracks', who went on to succeed in the heady lights of big time league. Wiki's love of family - and never losing sight of his Otara roots, is a highlight.

There are poignant moments, like the special foreword by his mother Etesa, who brought her three kids up on her own, and provided her kids with the opportunity to do the best they possibly could, surrounded by a loving environment. He played in top level football for more than a decade in the toughest rugby league competition in the world.

The guy's a class act - on and off the field. A great read.

A charmed combination of the Topp Twins and Jenny Cooper goes from strength to strength, this time bringing their talents together to present their five bestselling books in a treasury.